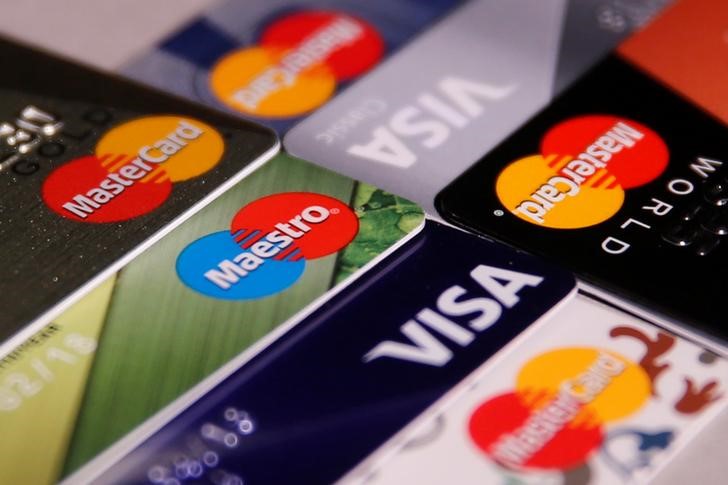 (Bloomberg) -- Americans are putting more on their credit cards and taking out fewer mortgages, as they need to increasingly borrow to cover the higher cost of everyday essentials and respond to rising interest rates.

There were a record 537 million credit card accounts in the first quarter, a jump of 31 million over the past year, according to the Federal Reserve Bank of New York’s quarterly report on household debt and credit. Meantime, mortgage originations totaled $859 billion in the first three months of 2022, the lowest in nearly two years.

While mortgages are still by far the biggest component of household debt at 71%, the data show how consumers are relying more on credit cards as decades-high inflation boosts the cost of everything from food and gas to shelter. And now that the Fed is tightening policy and mortgage rates are the highest since 2009, Americans are refinancing them much less, as well as auto debt.

The data reflect a stark contrast from 2021, when Americans capitalized on some of the lowest interest rates ever to refinance debt at historic levels. Now that the Fed has hiked rates by the most since 2000 and indicated it will keep doing so in the coming months, debt service costs are rising as well.

Economists have warned that higher interest payments could tip certain kinds of debt, especially student loans, into delinquency from historically low levels. Interest payments are starting to tick up across nearly all debt types, including credit cards, mortgages, auto loans, and home equity lines of credit, according to the New York Fed. There was also a small increase in the number of foreclosures in the first quarter.

A separate report last week showed US consumer borrowing soared in March by the most on record as credit-card balances ballooned and non-revolving credit jumped, underscoring the combined impact of solid spending and rising prices. That’s a good sign in that spending is the largest contributor to the economy, but could be worrisome if Americans can’t keep up on payments.

Those payments, as well as others with variable interest rates, are increasing, and threaten to squeeze already strained households who live paycheck-to-paycheck and whose wages aren’t keeping up with inflation.

Data out Wednesday is expected to show consumer prices rose 8.1% in April from a year ago. While that would mark a deceleration from the prior month, it’s still near the highest in 40 years.

Mortgage originations boomed in the pandemic when rates were low, but have been declining in recent weeks as rates rise. The 30-year mortgage rate as measured by Freddie Mac (OTC:FMCC) now stands at 5.27%, the highest since 2009.

“Unlike the 2003-2006 housing boom, mortgage debt has been rising much more slowly than home values,” New York Fed researchers led by Andrew Haughwout said in a separate blog post.

Haughwout also noted that loans nowadays are going to borrowers with higher credit scores, reflecting continuing high lending standards coming out of the 2008 financial crisis. More than two-thirds of newly originated mortgage debt last quarter was for borrowers with credit scores over 760, while just 2% went to subprime borrowers. That compares to an average of 12% in the years leading up to the Great Recession.

Autos were the third-highest category of debt after mortgages and student loans, thanks to an increase in prices that’s prompted buyers to borrow more. That may create a longer-term financial burden for households stuck with large loan payments, even as prices of used vehicles start coming down from their peaks.

As used-car prices drop, new borrowers in particular are at risk in that they may owe more on their cars than the vehicles are worth.

Student-loan debt in 2021 posted the smallest annual increase in nearly two decades, according to the New York Fed, as far fewer Americans enrolled in college during the pandemic, and interest payments were cut to 0% due to Covid-19 forbearance measures. The Biden administration last month extended the pause on payments to Aug. 31 from May 1.

Americans owe a collective $1.8 trillion in student-loan debt, according to a separate measure by the Fed.

(Corrects second paragraph to show there were a record 537 million credit card accounts in the first quarter, rather than that many were opened.)