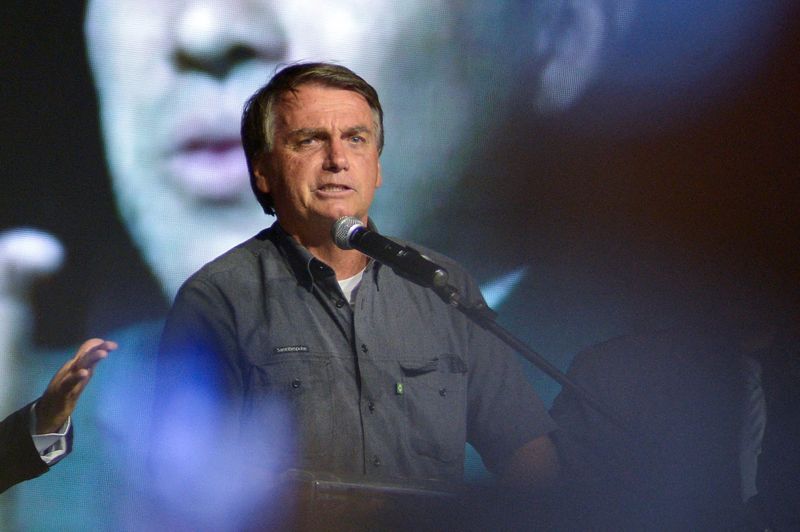 BRASILIA (Reuters) - Tax cuts are likely to cost over 110 billion reais ($21.5 billion) in Brazilian tax revenue this year, as President Jair Bolsonaro tries to ease inflation and spur the economy in an election year despite economists' warnings of blowback in 2023.

The estimated revenue loss, calculated by Reuters based on Brazilian Treasury data, includes a new government proposal to lower fuel prices that is still pending approval in Congress.

High inflation and an uneven economic recovery are weighing on the popularity of Bolsonaro, who trails former President Luiz Inacio Lula da Silva in the presidential race. As the October election approaches, Bolsonaro's government has increasingly embraced a patchwork policy of tax breaks.

However, more than half the new incentives are set to expire at the end of the year, leading analysts to warn of looming inflationary pressures in early 2023.

"We're going to have this dilemma next year: either we'll have higher inflation than forecast or we'll have a worse fiscal outlook than forecast in order to keep the tax exemptions," said former Treasury Secretary Jeferson Bittencourt, now an economist at ASA Investments.

The measures push about 0.9 percentage point of inflation from this year to 2023, he estimated, which would pressure the central bank to keep interest rates higher for longer. Policymakers have hiked interest rates to 12.75% from a 2% record-low in March 2021 and are set to raise them again this week.

The Economy Ministry did not reply to a request for comment.

"You solve a problem in 2022, but set up a bigger one in 2023," said XP (NASDAQ:XP) Investimentos economist Tatiana Nogueira.

The tax breaks this year range from lower import tariffs and industrial taxes (IPI), and even a special tax regime for soccer clubs. Brazil's IPI tax is levied on industries that make and import manufactured products, like refrigerators, cars, air conditioners and televisions.

More than half of the lost revenue this year is set to come from tax cuts and state subsidies to tamp down soaring fuel prices, expected to cost around 64.8 billion reais, pending further revisions in Congress.

In March, Special Treasury and Budget Secretary Esteves Colnago criticized tax breaks on gasoline for benefitting mostly middle- and upper-class families rather than the neediest Brazilians.

XP's Nogueira also warned that part of the savings from such tax breaks are absorbed by the fuel supply chain, with only 60% to 80% of the benefit reaching consumers.

Even that cost relief could soon be offset with a price increase from state-run oil firm Petrobras, which has a policy of setting domestic fuel prices in accordance with global market.