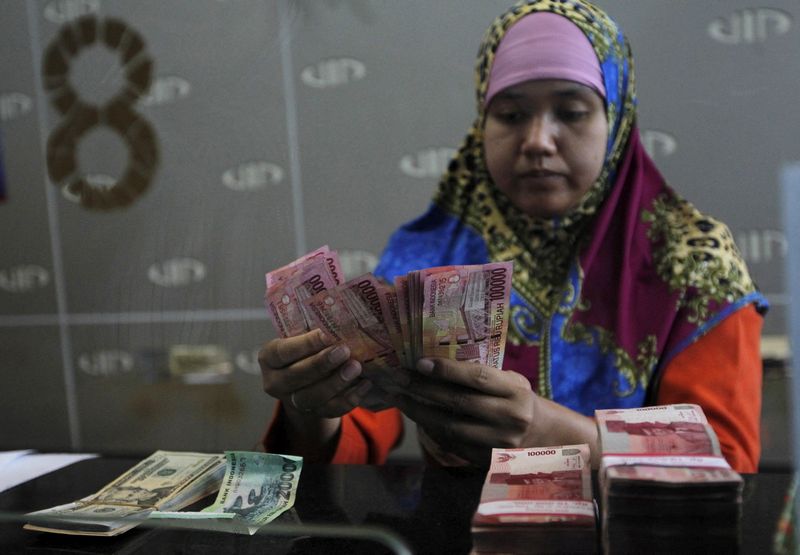 © Reuters. FILE PHOTO: A teller counts Indonesian rupiah notes for a customer at a money changer in Jakarta, Indonesia, August 26, 2015. Indonesia's central bank has urged exporters and businesses not to hoard foreign currency as part of its effort to maintain finan

By Rae Wee and Harish Sridharan

SINGAPORE (Reuters) - As the United States pushes ahead with its steepest interest rate hikes in a generation, investors are unusually poised to buy in Asia's emerging markets, betting authorities can tame inflation without triggering the capital-flight chaos of previous cycles.

While no rally is underway, steadying currency, debt and equity markets suggest investors may have already stopped rushing for the exits.

Beaten-down currencies such as South Korea's won and the Malaysian ringgit rallied on Thursday, and stock and bond markets in Seoul, Kuala Lumpur, Jakarta and Manila responded positively to the Federal Reserve's latest rate hike. [EMRG/FRX]

The Fed, which met market expectations with a 75 basis point (bp) rise overnight, has now lifted rates by a total of 150 bps in two meetings - the fastest pace since the early 1980s.

But chair Jerome Powell noted slowing spending and production and foreshadowed an eventual slowdown in hikes. Traders have taken the remarks as confirmation that a peak in U.S. interest rates is near and, with it, a top for the dollar and a trough for despair.

"Looking at the rising U.S. equity market and the less-hawkish communication by Powell, this is supporting Asian currencies and other emerging market (EM) currencies, and the recovery of EM should continue."

Bellwether markets in South Korea and Indonesia are showing signs that the worst may be over. Rather than collapsing, benchmark 10-year bonds in Indonesia have held up relatively well: the yield premium over Treasuries has actually narrowed this year..

South Korea's won, which has been battered by equity outflows on expectations that the country's growth-exposed heavy industry and high-tech manufacturing sectors will suffer as conditions tighten, has also paused for breath. (KS)

Having dropped nearly 9% for the year so far, the won was heading for its best onshore session in nearly a month on Thursday and has lifted about 2% from mid-July's 13-year low.

"In six to 12 months time, when inflation comes off globally and Fed tightening slows, that might benefit the won," said Bank of Singapore strategist Moh Siong Sim.

The moves are a far cry from the outset of the last Fed tightening cycle in 2013, when India and Indonesia were counted among the so-called "fragile five" emerging market countries, with assets on the front line of vulnerability to rising U.S. rates.

Indonesian stocks are set for their best month since April, since they are on course at least not to fall again, and the rupiah currency has dropped only 5% this year, even as the greenback's strength has lifted the U.S. dollar index by about 11%.

In 2013, by contrast, Indonesia's currency fell 21%, the 10-year yield soared 330 bps and stocks were flat as world equity markets rallied.

"What we've been pleasantly surprised with so far is that this time round the Asian markets have actually held up relatively well given the pressure that they've been under," said Thu Ha Chow, head of fixed income for Asia at Dutch asset manager Robeco.

"We're obviously waiting, like everybody else, for earnings ... but high-quality corporates have been relatively stable."

Risks abound, of course - especially as some central banks, notably in Thailand and Indonesia, are being slow to follow in the Fed in raising interest rates.

Neither country has lifted policy rates from pandemic lows, inviting downward pressure on their currencies that could in turn exacerbate inflation and outflows. Investors expect both to move soon, however.

"When the tide runs out and you're still not doing the right thing and raising rates, then all bets are off," said Howe Chung Wan, head of Asia fixed income at Principal Global Investors in Singapore, regarding Indonesia.

He expects inflation can breach Bank Indonesia's target band this year and force an interest rate rise sooner than policymakers intend. But, he added, if that happens in a market convinced that global inflation can be tamed, then investors will find confidence.

"This is where the EM investors are going to be, when we clear out on the Fed, when we think inflation is peaking, this is where we want to be."