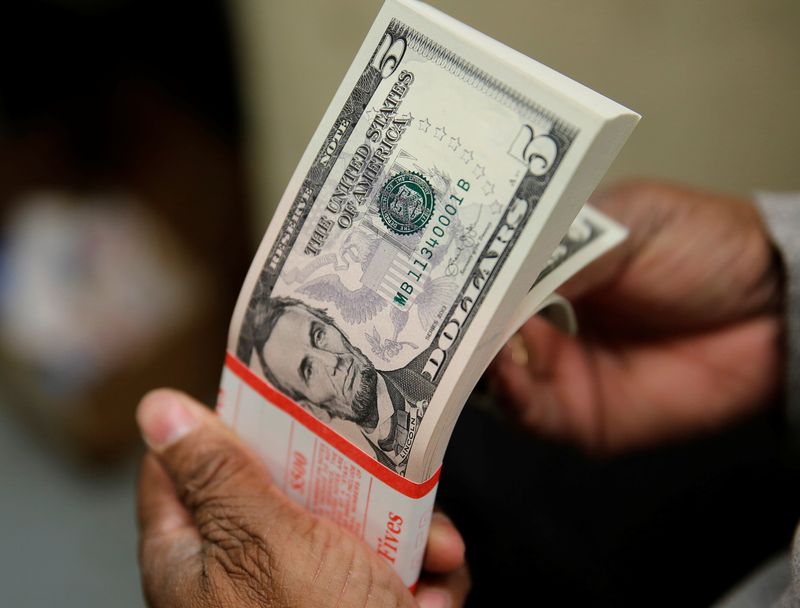 © Reuters. FILE PHOTO: A packet of U.S. five-dollar bills is inspected at the Bureau of Engraving and Printing in Washington March 26, 2015. REUTERS/Gary Cameron

NEW YORK (Reuters) - U.S. loans have outperformed other debt instruments this year because of the protection they offer from rising interest rates, but a sharp deterioration in financial markets over the past few weeks has spilled even into this traditional safe haven.

The Federal Reserve's plan to tighten financial conditions to fight inflation has weighed on U.S. credit markets this year, causing a sharp selloff across investment-grade and high-yield bonds, as well as government debt securities.

Leveraged loans tend to be used by buyout firms to fund acquisitions of companies with weak credit ratings. Banks package them into securities known as collateralized loan obligations, or CLOs, that are then sold to investors. As opposed to corporate bonds where interest is fixed, loans pay a floating interest rate, which rises as benchmark rates rise, making them attractive to investors when central banks tighten monetary policy.

However, market concerns over unrelenting inflation and whether the Fed's tightening monetary policies could tip the economy into a recession, have spilled into loans over the past few weeks.

"In the last week we saw greater weakness across all markets and the loan market just couldn't hide from that," said Andrew Sveen, portfolio manager and co-head of floating-rate loans at Morgan Stanley (NYSE:MS) Investment Management.

The price of the S&P Leveraged Loan Index was down to 95.7 as of Wednesday's close, according to Refinitiv data, from about 98 in mid-April and hitting its lowest levels since December 2020.

"Leveraged loans have been one of the casualties over recent weeks - prices continued to show signs of weakening for the second week in a row," Conor O'Toole, managing director at Deutsche Bank (ETR:DBKGn) said in a research note this week.

Barclays (LON:BARC) expects the loan index price to fall to 96 by year-end, which would lead to total returns of 2%-3% for the rest of the year - down from a previous forecast of 3%-4%.

Still, investors say the asset is attractive given interest rates are rising.

Year-to-date total returns have been minus-0.5% for leveraged loans, making them the best performing debt instrument this year, BofA said in a note this week. That compares with minus-9.2% for high-yield bonds and about minus-10% for Treasuries.

"We've already seen a significant reallocation of investment from high-yield into leveraged loans, and generally we expect those inflows to continue well into a hiking cycle," said Dan DeYoung, portfolio manager of the Columbia Floating Rate and Columbia High Yield Bond Funds at Columbia Threadneedle Investments.

For Morgan Stanley's Sveen, loan declines are generally expected to be much smaller than in other asset classes, with loans likely to move down 1% when equities, for example, move down 10% and high-yield bonds down 3%.

"It's pretty incredible volatility we're seeing in the marketplace and so it's not surprising that everyone is going to take a pause, including in a market that should be in favor like ours," he said.