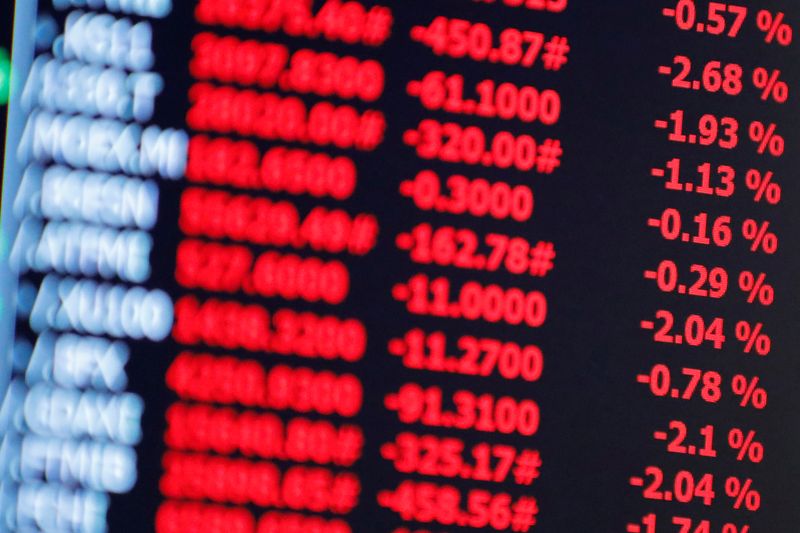 LONDON (Reuters) - One day you're out and the next day you're in: the world's battered sovereign bond markets are back in favour as global recession fears mount.

Government borrowing costs from Germany to France and Australia are down sharply this month, with 10-year bond yields down around 50 basis points each in July and set for their biggest monthly falls in at least a decade.

For sure, sticky inflation means not everyone is buying bonds and Friday's data showing euro zone inflation at another record high was a trigger for fresh bond selling.

But a shift appears to be taking place as signs of slowing economic growth suggest a peak in official interest rates is nearing. That means the government bonds investors shunned in the first half of 2022 are regaining their appeal.

Bond funds saw inflows worth $3.6 billion in the week to Wednesday, the largest since March, BofA's weekly analysis of flows released on Friday showed.

ING senior rates strategist Antoine Bouvet said he would not be surprised if Germany's 10-year Bund yield tested 0.5% in coming months. It was at 0.9% on Friday and had risen to almost 2% in June.

"The tide has indeed turned, bonds are back to behaving like recession hedges," Bouvet said.

Data on Thursday showed the U.S. economy contracted again in the second quarter. Euro zone data on Friday showed the bloc holding up better than expected although powerhouse Germany is on the edge of contraction.

Investors are increasing exposure to longer-dated debt on growth worries.

Flavio Carpenzano, investment director at Capital Group, which manages $2.6 trillion worth of assets, said he had started to increase duration, which represents sensitivity to moves in underlying interest rates.

"Recently we reduced underweight duration (positions) because Europe might enter into recession, and in that case we want to have core assets like German Bunds," he said.

"From that perspective, we gradually started to increase duration through German bonds in the 10-year part of the curve to protect the portfolio to the downside."

Total returns, including capital gains and coupon payments, on Austria's 100-year bonds are up 33% in July, according to Refinitiv data. But as with most very long-dated debt an investor who had bought at the start of 2022 would be down significantly year to date.

The European Central Bank hiked rates by 50 basis points last week and markets had fully priced in a further big move in September. They now attribute a roughly 42% chance of another half-point hike.

Markets are pricing in a peak U.S. interest rate of 3.2% by the end of this year and 50 basis points of rate cuts in 2023. Just before the Federal Reserve raised rates by 75 basis points in mid-June, they had priced U.S. rates peaking at over 4% in 2023 and just one quarter-point rate cut by the end of next year.

Earlier this week, the Fed delivered another 0.75% rate increase.

"We expect a recession in 2023 and think the Fed will start cutting rates towards the end of next year and so it's hard to see a sustained move higher in U.S. bond yields," she said.

Investors said the outlook for Europe's peripheral bond markets such as Italy was more complicated, given growth concerns and political instability.

Others said the downward move in bond yields was not a one-way bet given the fight against inflation was far from won - euro zone price growth rose to a new record high of 8.9% in July.

"I feel like the rally in rates is overdone," said Tim Graf, head of EMEA macro strategy at State Street (NYSE:STT).

"German 10-year bond yields at 0.9%, given the inflation picture, is not something I would want to own," he said, noting Bund yields could move back towards 1.25-1.5% by year-end.