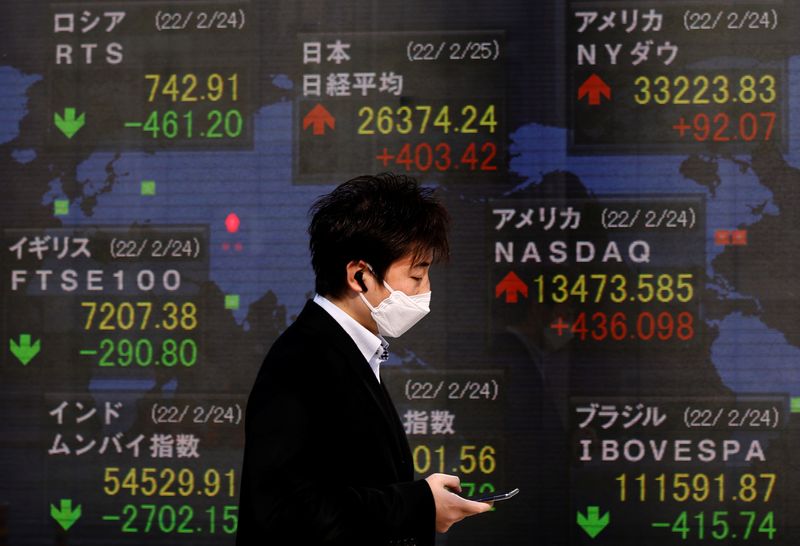 © Reuters. FILE PHOTO: A man wearing a protective mask, amid the coronavirus disease (COVID-19) outbreak, walks past an electronic board displaying Russian Trading System (RTS) Index, Japan's Nikkei index and the Dow Jones Industrial Average outside a brokerage in T

HONG KONG (Reuters) - Asian shares clung on to small gains on Friday thanks to a solid Wall Street session, but were still set for their worst month in two years, as China growth fears and looming U.S. rate hikes dragged on sentiment and sent the safe-haven dollar soaring.

Japanese markets are closed for a holiday.

Overall sentiment was still fragile with Nasdaq futures off around 1% in early Asia trade, pressured by disappointing earnings from Amazon (NASDAQ:AMZN) after market close.

Friday's gains were marginal compared to the brutal sell-offs in globally stocks in recent weeks. The Asian regional benchmark is heading for a 2% decline this week and a 7.3% drop for the month, its worst month since March 2020.

"There are four near term catalysts driving the market at the moment: U.S. earnings which we are about half way through, rising U.S. Treasury yields and lots of hawkish speak from the Fed, the war Ukraine, and China policy," said Fook-Hien Yap, senior investment strategist at Standard Chartered (OTC:SCBFF) Wealth Management.

One key focus is the upcoming meeting of China's Politburo, the nation's highest decision-making body, as markets look for more signs of economic support. But analysts say Beijing's zero-COVID strategy restrict policymakers' options as supply chains are in disarray, while operations in many factories and peoples' movements have been curtailed.

Beijing closed some schools and public spaces on Thursday, as most of the Chinese capital's 22 million residents turned up for more mass COVID-19 testing aimed at averting a Shanghai-like lockdown.

U.S. treasury yields were trading within their recent ranges, a little shy of their peaks hit last week.

They didn't trade in Asia on Friday due to the holiday in Tokyo.

This week has also been a volatile one for currencies.

The dollar index, which tracks the greenback against six major peers was a whisker softer at 103.56, having hit 103.93 on Thursday, its highest level since late 2022.

On top of the safety-bid for the dollar, the rally has also been fed by market expectations for 150 basis points of rate hikes in just three Federal Reserve meetings. The aggressive Fed tightening path, mainly to curtail sky high inflation, far out paces other global central banks.

The dollar's recent gains have been most significant against the yen, and it swept past the key psychological 130 yen level on Thursday, setting a fresh 20 year high. The dollar also scored a five year high on the euro. [FRX/]

Oil prices remained choppy as traders grappled with the supply issues stemming from the war in Ukraine as well as the demand impact of lockdowns in China.