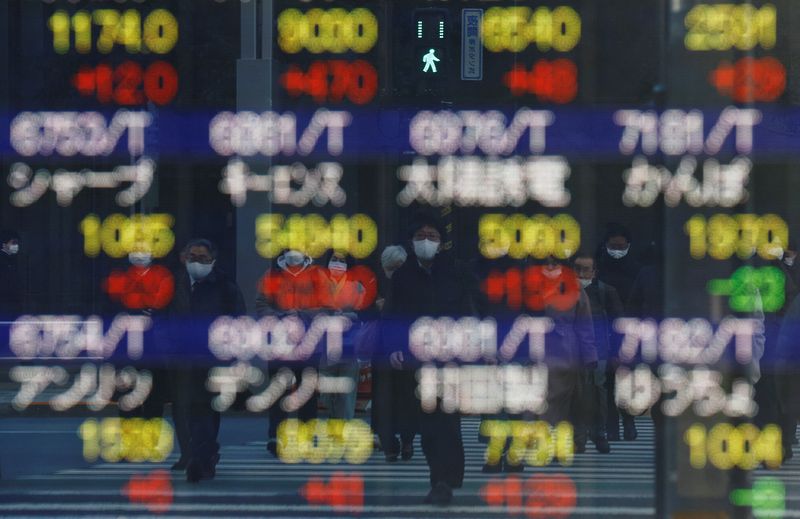 SYDNEY (Reuters) - Asian shares were sluggish on Monday as disappointing Chinese economic data fed doubts Wall Street's rally could be sustained, while the dollar continued its retreat on the yen as speculators were forced out of suddenly unprofitable short positions.

South Korean activity weakened for the first time in two years, while Japan expanded at the slowest pace in 10 months.

That did not bode well for the raft of other PMIs due this week, including the influential U.S. ISM survey, while the July payrolls report on Friday should also show a further slowdown.

At the same time U.S. data out Friday showed stubbornly high inflation and wages growth, while central banks in the UK, Australia and India are all expected to hike again this week.

"We expect the Band of England to step up monetary tightening with a 50bp hike at its August meeting. The increase in energy prices is likely to be the main driver," warned analysts at Barclays (LON:BARC).

"Central banks focus on the still strong inflation momentum and tight labour markets rather than signals of slowing growth. This could upset markets' recent 'bad news is good news' view."

The caution was evident as MSCI's broadest index of Asia-Pacific shares outside Japan eased 0.2%.

Chinese blue chips were flat, while Japan's Nikkei eked out a gain of 0.4% and South Korea 0.3%.

While U.S. corporate earnings have mostly beaten lowered forecasts, analysts at BofA cautioned that only 60% of the consumer discretionary sector had reported and it was under the most pressure given inflation concerns for consumers.

"Our bull market signposts also indicate it's premature to call a bottom: historical market bottoms were accompanied by over 80% of these indicators being triggered vs just 30% currently," BofA said in a note.

"Moreover, bear markets always ended after the Federal Reserve cut, which likely is at least six months away - BofA house view is for a first cut in 3Q23."

Bond markets have also been rallying hard, with U.S. 10-year yields falling 35 basis points last month for the biggest decline since the start of the pandemic. Yields were last at 2.660%, a long way from the June top of 3.498%.

The yield curve remains sharply inverted suggesting bond investors are more pessimistic on the economy than their equity brethren. [US/]

The reversal in yields has taken some heat out of the dollar, which lost ground for a second week last week to stand at 105.650 on a basket of currencies, compared to its recent peak of 109.290.

The biggest decline came against the yen where speculators had been massively short and found themselves squeezed out by the sudden turnaround. The dollar was down 0.6% at 132.43 yen, having shed a sharp 2.1% last week.

The dollar fared better on the euro, which has a European energy crisis to contend with, and made hardly any headway last week. The euro was last at $1.0236, and eyeing stiff resistance around $1.0278.

"Our sense is that the risk-on response to the Fed is largely down to a combination of wishful thinking and stretched positioning," he argued.

"In our view, there was little in Chair Powell's remarks to suggest policymakers will abandon aggressive rate hikes while inflation remains so far above target," he added. "If we are right that markets have misread the Fed's intention, the dollar will probably resume its rally before too long."

Oil prices drifted back as the market waited to see if this week's meeting of OPEC+ produced an increase in supply, even if only minor. [O/R]