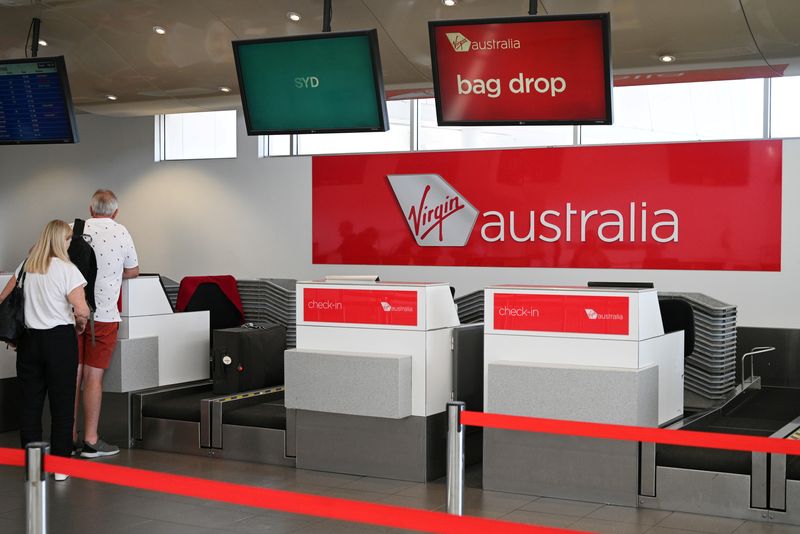 By Scott Murdoch and Jamie Freed

SYDNEY (Reuters) -Bain Capital said on Monday it is looking to relist airline Virgin Australia, in a move that would come as the domestic aviation market bounces back strongly from pandemic lows.

A listing of Australia's second-biggest carrier would likely be one of the country's largest initial public offerings (IPOs) in 2023 after capital markets activity plunged last year amid global financial market uncertainty.

"In the coming months we will consider how to best position Virgin Australia for continued growth and long term prosperity," Mike Murphy, a Sydney-based partner at the U.S. private equity firm, said in a statement.

"It is Bain Capital's current intention to retain a significant shareholding in a future IPO of Virgin Australia."

Bain said it would seek advice on the best timing and structure to return the airline to the Australian Securities Exchange but added that no decisions had been made as to if and when that would happen.

It sent a request for proposals on the listing to investment banks on Monday and expects to make appointments within a month, said two people with direct knowledge of the matter, declining to be identified as they were not authorised to speak with media.

Boutique firm Reunion Capital has been appointed as a financial advisor on the deal, the people said, and will oversee the appointment of investment banks to lead the IPO.

The size of the stake that Bain Capital should retain is one of the questions banks pitching for a role on the IPO will be asked to address in terms of forecasting how large demand for the deal could be, one of the people said.

Private equity-led IPOs in Australia have seen such firms typically sell at least 50% of their stakes to ensure liquidity is available for investors in the deal.

Bain bought Virgin Australia for A$3.5 billion ($2.45 billion) including liabilities in 2020 after the airline was placed in voluntary administration. Creditors approved the buyout in September 2020.

Virgin, which has about a third of a domestic aviation market dominated by Qantas Airways Ltd, had reported seven annual losses in a row even before the pandemic decimated travel globally.

Efforts to turn the airline around were often stymied by a board that included representatives from five foreign investors including airlines who controlled more than 90% of the company and were reluctant to inject new capital at the start of the pandemic as their own businesses suffered.

Aviation market conditions have improved substantially since then after Australia's state and international borders reopened. Virgin has also rebuilt its Boeing (NYSE:BA) Co 737 fleet to around the same size it was before the pandemic and closed its previously money-losing international and budget divisions.

The potential listing comes as Qantas is poised to post a first-half underlying profit of A$1.35 billion to A$1.45 billion next month, a sharp turnaround from last year's underlying loss before tax of A$1.28 billion.

Bankers are hopeful IPO markets will improve in 2023 as interest rates in most major markets are forecast to soon peak amid signs inflation is starting to moderate.