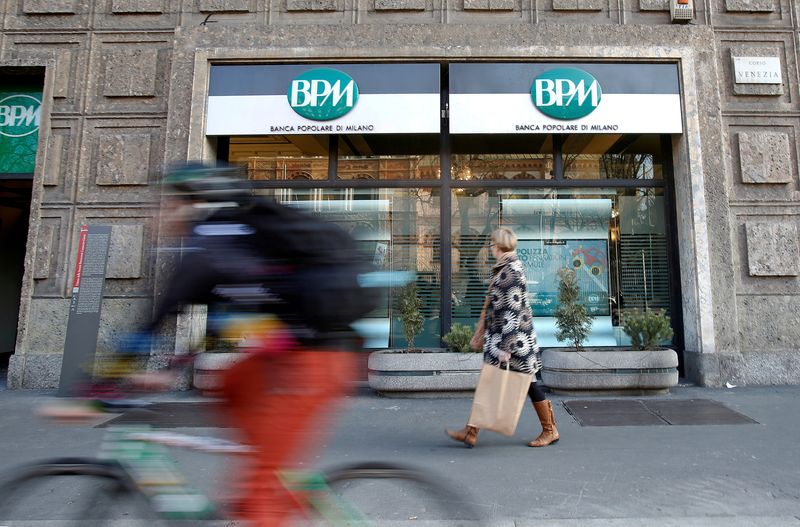 Banco BPM, which is Italy's third-largest bank, said its net profit for the three months to March was up 77.6% from a year earlier to 177.8 million euros ($187 million), higher than a 131 million-euro forecast in a Reuters poll of analysts.

First-quarter revenues were 1.186 billion euros, slightly above expectations and up 5.2% over the previous year, supported by strong trading gains and buoyant net interest income.

Banco BPM said it would continue its drive to reduce risks and as part of this strategy announced the sale of 700 million euros of soured loans.

The bank wants to make net fees its main profit driver as it focuses on wealth management and insurance.

Earlier last month it made its first move under its new insurance strategy by acquiring full ownership of its life insurance joint-venture held by France's Covea.

Banco BPM also has an options to exit early, from Jan.1 2023, from another insurance partnership it has with Cattolica, which is now a part of Italy's Generali (BIT:GASI).

Its main option is to internalise the insurance business by the end of 2023.

However it will asses a potential partnership for the business after receiving several expression of interest from leading players, including Generali, France's AXA, Germany's Allianz (ETR:ALVG) as well as from its main shareholder, French bank Credit Agricole (OTC:CRARY).

Earlier last month Credit Agricole emerged as the biggest investor in Banco BPM with a 9.2% stake which it said was aimed at expanding the scope of strategic partnerships between the two, currently focused on consumer credit.

The move stoked speculation that a full takeover could follow. Credit Agricole, however, told Italy's Treasury it had no bid plan, sources close to the matter said last month.