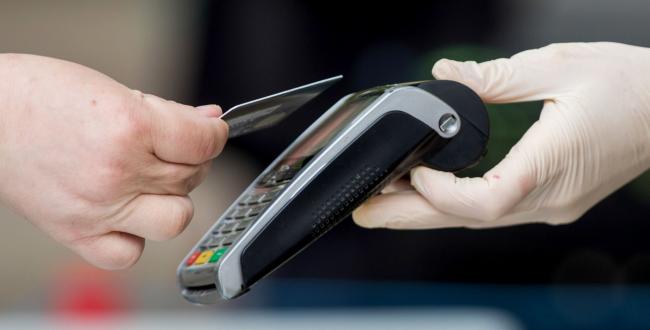 © Bloomberg. A customer uses a bank card to make a contactless payment on a market stall in Norwich, U.K., on Tuesday, June 9, 2020. With the economy on course for its deepest recession for at least a century, the government is now paying the wages of more than 10 million workers to stave off mass unemployment. Photographer: Chris Ratcliffe/Bloomberg

“The consumer is still spending pretty robustly,” and corporate balance sheets are healthy, Borthwick said Monday at the Morgan Stanley (NYSE:MS) US financials conference. Spending was up 9% in June from a year earlier, with balances still growing this quarter, he said.

The comments echo Chief Executive Officer Brian Moynihan’s previous statements that US consumers are increasing spending and paying down credit-card balances, despite inflation. Borthwick said he doesn’t see a recession on the horizon, in contrast to some of the predictions by other leaders on Wall Street. Jamie Dimon warned investors earlier this month to prepare for an economic “hurricane” as the economy stumbles.

“Credit is in great shape,” and credit-card spending is lower than average at the bank, which Borthwick said is another sign of consumer strength. On savings and loans, mortgages aren’t necessarily accelerating, but are “keeping pace” and growing over time at Bank of America, he said.

The Charlotte, North Carolina-based bank also sees strength in borrowing, and is on track for single-digit loan growth, Borthwick said. Loans in the wealth-management business are growing, which should be a net-interest-income “uplift” to “offset some of the fees,” he said.

Borthwick said with further loan growth, the bank positioned its balance sheet to be nimble given the expectation for rising interest rates. “We’re not necessarily looking for duration risk, or credit risk,” he said, adding the bank wants to “have a lot of flexibility.”

The bank’s trading business also held steady amid recent market volatility, and is on track for a 10% to 16% increase from a year ago, according to Borthwick. Meanwhile, the investing-banking environment has been “challenging” this quarter, with the firm looking to hold fees between $1 billion to $1.25 billion. “We’ve probably captured a little market share, but it’s off a really low base,” he said.

Bank of America expects to take a hit of between $100 million and $150 million from its leveraged-finance unit, which takes on riskier positions on behalf of clients. That writedown will flow through other income at the bank, according to Borthwick. “We’re keeping an eye on that.”