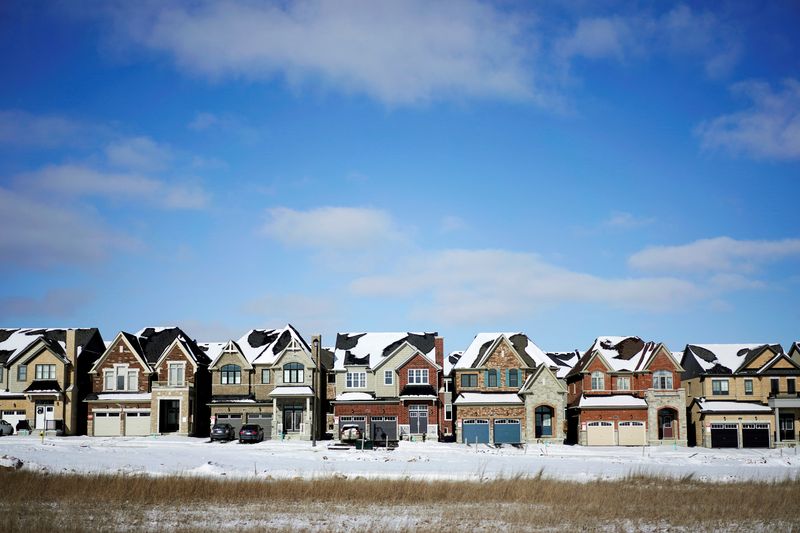 TORONTO (Reuters) - Canadians whose use of home equity lines of credit (HELOC) has climbed recently following a surge in real estate values during the pandemic could be hit by the next central bank interest-rate hike, which should double monthly payments from just a few months ago.

This type of credit is unlikely to lead to significant losses at lenders, given borrowing limits and their secured nature. Still, Canada has the third-highest https://data.oecd.org/hha/household-debt.htm household indebtedness in the Group of 20, and experts said surging interest rates on these variable-rate products could stress borrowers and lift delinquencies beyond pre-pandemic levels.

Borrowing on HELOCs dipped earlier in the pandemic as lockdowns and government aid lifted savings, but preliminary data from Equifax (NYSE:EFX) showed balances on these products rose 2% in the second quarter from the prior three months.

"Compared to the last couple of years, that is one of the biggest movements we've seen" quarter on quarter, said Rebecca Oakes, vice president of advanced analytics at Equifax Canada.

The Bank of Canada's shock 1-percentage-point interest rate hike this month and the widely expected 50-basis-point increase in September would lift the prime rate to 5.2%, the highest since 2008. This would double HELOC payments from just six months earlier, before the rate hikes began. HELOCs at major lenders are generally priced 50 basis points above the prime rate.

While delinquencies have remained low, at around 0.16% of HELOC balances, they could rise as rates increase further, Oakes said. Stress tests and lending standards mitigate the risk, but the number of Canadians with multiple mortgages rose during the pandemic, up 7.5% in the first quarter from two years ago, according to Equifax. Those with more than four mortgages jumped 17.5%.

Canadians can use HELOCs to fund most of the downpayments on investment properties, although data was not available on what proportion of buyers do this.

Mortgage broker Ron Butler cited a client who used a HELOC on his primary home during the pandemic to fund the downpayment on an investment property, then borrowed against that. Now, since the last rate hike, he is looking at a monthly loss of C$600 on rent alone, excluding other expenses.

The monthly payment on a C$100,000 HELOC is around C$400. Most HELOC balances are below this level, said mortgage strategist Rob McLister. HELOCs are repaid during a repayment period that follows the draw period.

"Arrears will definitely tick higher in the next year but it would take an extraordinary increase in unemployment, now at a record low, to push defaults to worrisome levels," he said.

"I'd peg the chances of more than 1% of HELOC borrowers defaulting at roughly 1 in 100."