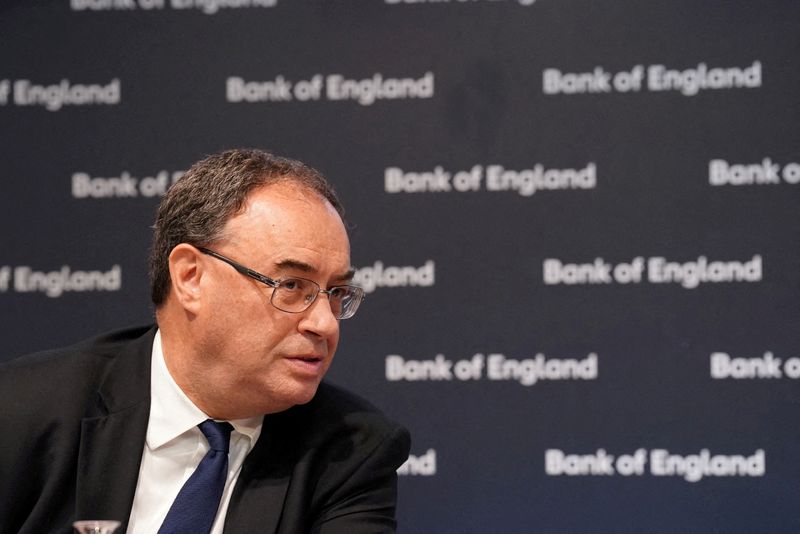 LONDON (Reuters) - The Bank of England's top brass defended their record on Britain's monetary policy on Thursday, after a cabinet minister talked openly about diluting the central bank's operational independence.

Speaking shortly after the BoE raised interest rates to 1.75% from 1.25%, BoE Governor Andrew Bailey said it is important for the central bank to make policy decisions independent of the government.

With inflation soon heading into double digits, Conservative politicians have attacked the BoE's performance as they are under pressure to help households facing soaring energy bills.

Foreign Secretary Liz Truss, favourite to succeed Boris Johnson as prime minister, has said she plans to review the BoE's mandate, but has not said exactly what that would cover.

Bailey said it is important to understand how the regime was constructed in 1997, adding it has served very well since then. He would not comment on the Conservative Party leadership race.

Attorney General Suella Braverman - a key Truss ally - has said the BoE was too slow to raise interest rates in the face of rising inflation. The BoE now predicts inflation will peak at more than 13%, more than six times its target.

"That's going to be looking into detail at exactly what the Bank of England does, and see whether it's fit for purpose in terms of its entire exclusionary independence over interest rates," Braverman told Sky News on Thursday.

"The last time this was done was in 1997 - it's right and it's ripe now to review whether that is the right settlement."

Braverman said they were not talking about revoking the BoE's independence.

"But there are many other models around the world where central banks have different degrees of independence over monetary policy," she said.

BoE Deputy Governor Ben Broadbent rejected claims that central bank inaction last year contributed to the inflation surge, and said it was impossible to predict the impact of Russia's invasion of Ukraine.

If the BoE had been able to foresee the invasion, Broadbent said interest rates would be far into the double digits by now.

"We would have had a far bigger recession, even than the one we're forecasting now," he said.

"Any idea of interference - then people will have to think about what sort of premium will have to be factored into UK rates, and the risk factor for the pound," he said.

Truss has previously cited Japan - which adopted radically loose monetary policies in a desperate effort to break out of deflation - as a country the Britain could learn from because it has relatively low inflation now.