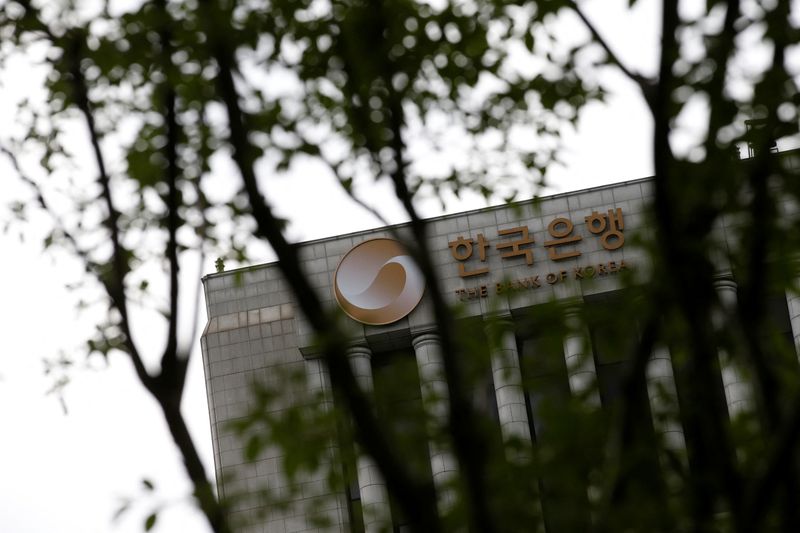 © Reuters. FILE PHOTO: The logo of the Bank of Korea is seen on the top of its building in Seoul, South Korea, July 14, 2016. REUTERS/Kim Hong-Ji

BENGALURU (Reuters) - The Bank of Korea is likely to raise its policy rate back to where it was before the pandemic on Friday, a Reuters poll found, as it looks to restrain rising inflation and the increasing debt that households are taking on to buy property.

Twenty-five of 35 economists who answered a Jan. 5-11 Reuters poll said the BOK would raise its base rate by 25 basis points to 1.25% at its Jan. 14 policy meeting. This was its level in February 2020, just before the coronavirus crisis broke out.

South Korea's central bank was the first and only one among its main Asian peers to raise interest rates twice last year, most recently by 25 basis points at its last meeting, in November.

The BOK has not raised rates at back-to-back meetings for over two decades.

"Although economic uncertainties at home and abroad are increasing, Governor Lee Ju-yeol reaffirmed his will to normalise monetary policy to respond to financial imbalances through remarks on rising housing prices and increasing household debt," said Paik Yoon-min, fixed-income analyst at Kyobo Securities.

"The fact inflationary pressure can continue for a considerable period of time is also considered a factor that strengthens the justification for an interest rate hike."

Inflation in Asia's fourth-largest economy accelerated last year to its highest level since 2011, far outpacing the central bank's own forecasts, suggesting to policymakers that a period of higher prices would last longer than anticipated.

That bolsters the case for the BOK to prevent inflation accelerating further at a time when house prices have gone through the roof.

After an expected rise on Friday, the BOK was forecast to stay on hold in the first half of this year and then deliver another rate rise in the third quarter to 1.50%. It was then expected to stay there at least through 2023.

Still, over one-quarter of respondents did not pencil in a rate hike at the Jan. 14 meeting.

"The Bank of Korea rarely hikes interest rates at consecutive meetings. After November's increase, we expect the policy rate to be left unchanged on Friday," said Alex Holmes at Capital Economics, who sees three rate increases later this year.

South Korea is also gearing up for a presidential election in March. Some analysts say the recent surge in cases of the Omicron coronavirus variant will encourage the BOK to be cautious in its monetary policy.

Six of seven respondents to an additional question said risks to their inflation forecasts were skewed more to the upside.

Five of the seven said risks to their growth forecasts were skewed to the downside.

The economy was expected to expand 2.9% and 2.5% this year and next, a slowdown from last year's 3.9%, based on median forecasts from the poll.