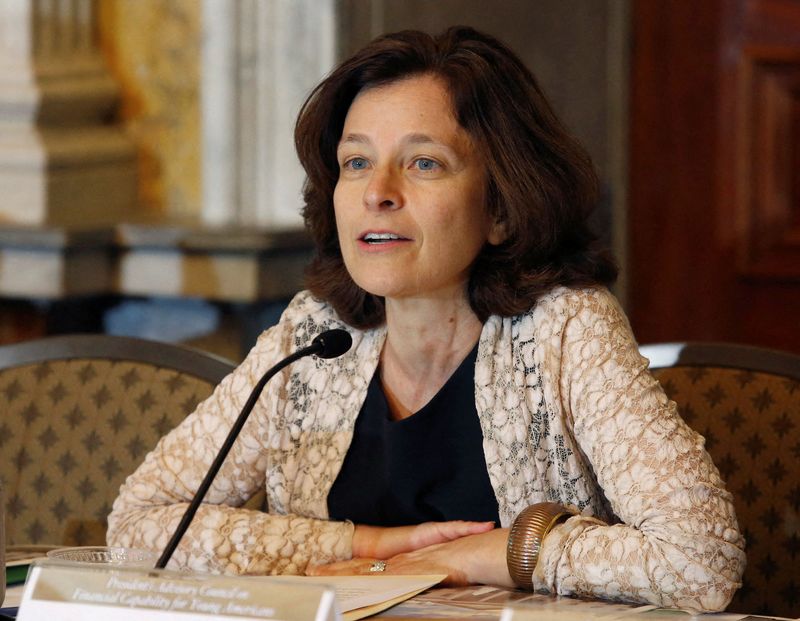 © Reuters. FILE PHOTO: Sarah Bloom Raskin, in her role as Deputy Treasury Secretary in October 2014, participates in an open meeting of the President's Advisory Council on Financial Capability for Young Americans at the Treasury Department in Washington, October 2,

(Reuters) - U.S. President Joe Biden could pick former Federal Reserve Governor Sarah Bloom Raskin as his choice for vice chair of supervision at the central bank, Axios reported on Monday, saying an announcement is expected as soon as this week.

Raskin, who served in the Treasury Department in the Obama administration, could bring a tougher regulatory profile to the country's most powerful bank oversight role, a position recently vacated by Randal Quarles, a Donald Trump appointee.

The vice chair of supervision is the most consequential of the vacancies on the Fed's seven-member board available to be filled by Biden, giving the first-term Democrat an opportunity to leave a lasting imprint on both Wall Street oversight and U.S. monetary policy.

Biden is also considering two Black economists - Lisa Cook from Michigan University and Philip Jefferson from Davidson College in North Carolina for seats on the Fed board.

Reuters could not immediately reach the White House for comment.

News of Biden considering Raskin to lead regulation at the central bank as part of a slate of three nominees to its Board of Governors was earlier reported by The Wall Street Journal.