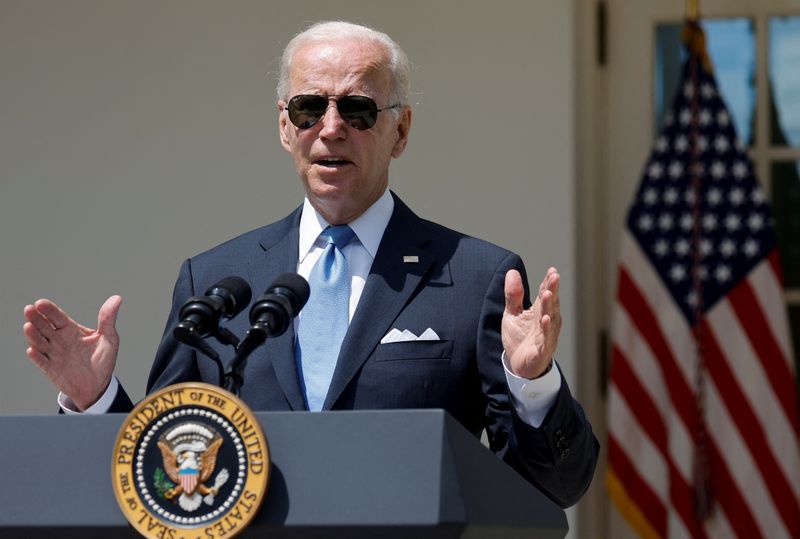 © Reuters. U.S. President Joe Biden delivers remarks to staff in the Rose Garden as he returns from COVID-19 isolation to work in the Oval Office at the White House in Washington, U.S. July 27, 2022. REUTERS/Jonathan Ernst

WASHINGTON (Reuters) -President Joe Biden worked on Thursday to soothe voters' angst about the state of the economy, saying it was no shock to see a slowdown after data showed the economy contracted again in the second quarter.

"It's no surprise that the economy is slowing down as the Federal Reserve acts to bring down inflation," he said in a statement. "We are on the right path and we will come through this transition stronger and more secure."

Concerns about the economy have become Biden's top political focus headed into Nov. 8 midterm elections where his Democratic Party's control of Congress is on the line.

The president's approval rating has fallen to a record low of 36%, according to Reuters/Ipsos polling, with the economy listed at the top of voters' concerns as higher grocery, gas and housing bills mount.

While the second straight quarterly decline in GDP meets a standard definition of a recession, the White House says that broader conditions of a recession are nowhere close to being met, given strong consumer spending and job markets.

Biden remained upbeat on the outlook for the economy even as fears of a slowdown have joined concerns about inflation reaching 40 year highs. In his statement, he noted the job market was historically strong and consumer spending continued to grow.

White House officials believe the GDP weakness is due to one-off factors, including a decline in companies restocking inventories, that may not reflect broader trends.

They also worry that talking about recession can become a self-fulfilling prophecy as businesses and consumers, concerned that tougher times are ahead, cut back on spending and investment plans.

Biden is set to host the chief executives of Marriott International (NASDAQ:MAR) Inc, Bank of America (NYSE:BAC), and Deloitte along with several top administration advisers at a White House meeting on the economy on Thursday.

The Republican Party has used high inflation and economic weaknesses to attack Biden's economic and spending priorities. The party has been scathing in its criticism of White House attempts to push back on recession talk.

The Fed on Wednesday raised its policy rate by another three-quarters of a percentage point, bringing the total interest rate hikes since March to 225 basis points. Fed Chair Jerome Powell acknowledged the softening economic activity as a result of tighter monetary policy.