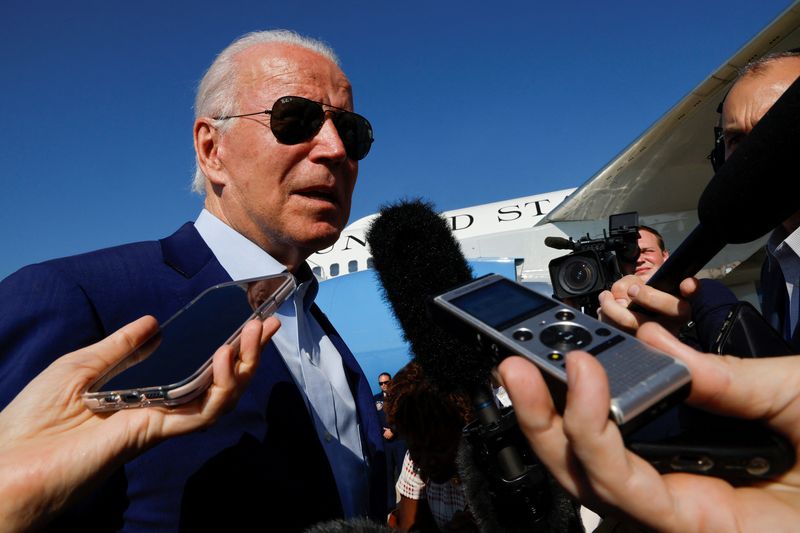 WASHINGTON (Reuters) - President Joe Biden will lay out plans on Thursday to ask Congress for $37 billion for crime prevention programs as he seeks to address one of the top concerns among Americans ahead of congressional elections in November.

Biden will outline details of his Safer America Plan in a visit to Wilkes-Barre, Pennsylvania. The $37 billion will be included in his budget request to Congress for fiscal 2023, which begins Oct. 1.

His plans include $13 billion over the next five years to hire and train an additional 100,000 police officers, a White House fact sheet said.

Biden has long rejected some progressive Democrats' drive to "defund the police." Polls show Americans consider crime one of the top challenges facing the country, and Biden is attempting to bolster Democrats in what are expected to be closely fought midterm elections in November that will determine whether they remain in control of Congress.

Biden would spend $3 billion to help communities clear court backlogs and set up task forces to share intelligence, with an eye toward reducing gun violence. His plan would also impose tougher penalties for fentanyl trafficking amid an epidemic of drug overdoses.

To tackle organized retail theft, the plan calls on Congress to pass legislation to require online marketplaces like Amazon (NASDAQ:AMZN) to verify third-party sellers’ information, and to impose liability on online marketplaces for the sale of stolen goods on their platforms.

Biden's plan establishes a $15 billion grant program called Accelerating Justice System Reform that cities and states could use over the next 10 years to pursue strategies to prevent violent crime and to ease the burden on police by identifying non-violent situations that may merit a public-health response, the White House said.