BoE torn over whether to join big rate hike club 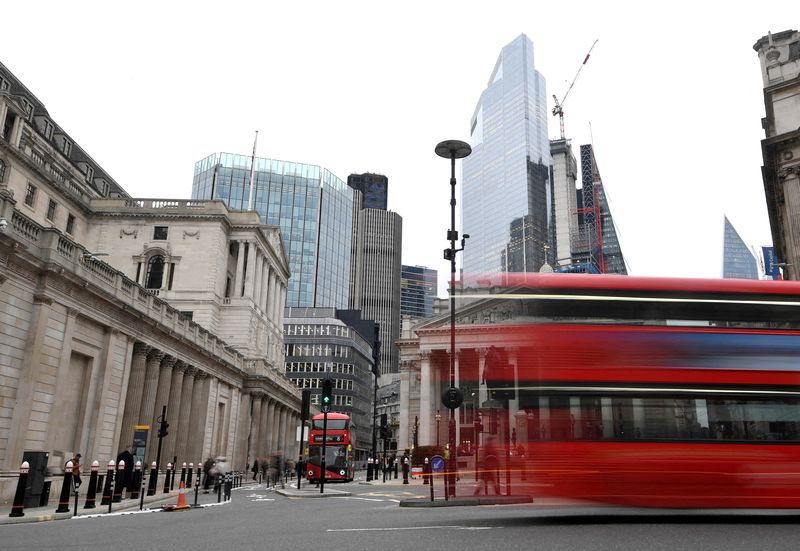 LONDON (Reuters) - The Bank of England must decide next week whether to join the ranks of central banks rushing out their biggest interest rate hikes in decades, or whether the warning signs of a recession mean it should tread more cautiously.

The BoE was the first big central bank to increase borrowing costs last December as inflation began to accelerate in the global economy.

Now, the U.S. Federal Reserve, the European Central Bank and others are making more drastic moves. The Fed looks set to raise its benchmark rate by a rare three quarters of a percentage point for the second month in a row this week.

As policymakers around the world scramble to catch up with inflation, investors are putting a nearly 90% chance on the BoE raising Bank Rate by half a percentage point to 1.75% on Aug. 4.

That would be its biggest rate hike since 1995 and the first increase on that scale since the British central bank was given operational independence 25 years ago.

However, economists who study the BoE's policy signals are more divided over the likelihood of a big move next week.

The BoE's Monetary Policy Committee said in June it was ready to "act forcefully" if it saw signs that the jump in inflation was turning into a more persistent problem.

Since then, inflation has climbed further to 9.4%, a 40-year high, and a new set of BoE economic forecasts due next week could point to inflation peaking at 12% in October - six times its target level - after higher fuel prices caused by Russia's invasion of Ukraine and sterling's recent weakness.

With Liz Truss, the front-runner to become Britain's next prime minister, promising to set a "clear direction of travel" for the BoE, Governor Andrew Bailey has said a 50 basis-point increase is on the table next week, alongside a 25 bps move.

Allan Monks, an economist with J.P. Morgan, said the priority for Bailey and his colleagues would probably be the risks from further rises in inflation rather than the signs of a slowdown in the global economy.

"Although recession concerns have intensified of late, the recent UK data point to a slowdown rather than anything worse," Monks said in a note to clients, predicting a 7-2 MPC vote for a 50 basis-point increase.

At its last two meetings, only three MPC members voted for a rate hike that big.

But other economists say several measures of inflation expectations - while high - have come off the boil and there are signs that more people are returning to the labour market, potentially easing some inflation concerns for the BoE.

"We still narrowly favour a 25-basis-point rate hike at August's meeting. But we wouldn't be surprised if the MPC talked itself into a larger rise."

In its last quarterly forecasts, the BoE said it saw almost no growth in Britain's economy before 2025 at the earliest.

Although the government has announced more cost-of-living support for households since then, the signs of a global slowdown have mounted.

As well its interest rate decision, the BoE will give more details of how it plans to proceed with active sales of its government bond holdings as it seeks to accelerate the reversal of its other main stimulus programme.

Bailey said last week that the BoE could seek to reduce its 847 billion pounds ($1.0 trillion) of gilt holdings by up to 100 billion pounds over the space of a year.