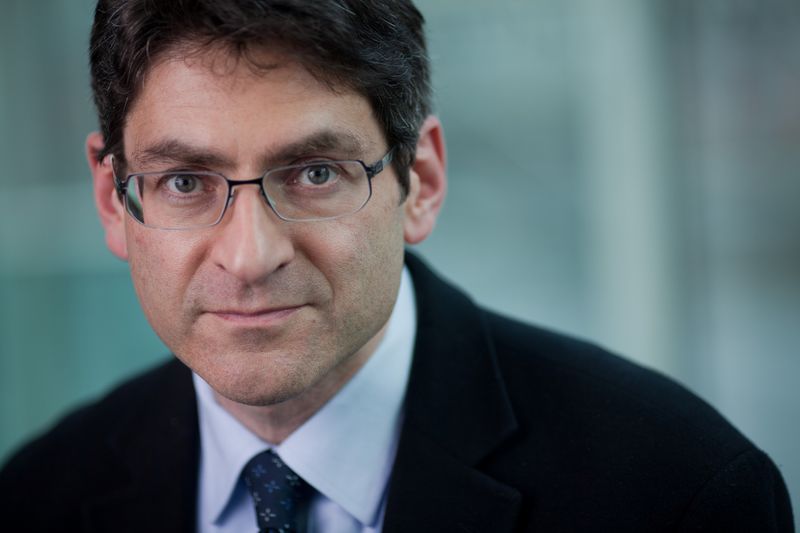 © Reuters. FILE PHOTO: Professor Jonathan Haskel, who has just been appointed to the Monetary Policy Committee of the Bank of England, is seen in this undated portrait released by HM Treasury in London, Britain, May 31, 2018. Jason Alden/UK Treasury/Handout via REUT

LONDON (Reuters) -Bank of England policymaker Jonathan Haskel said the UK central bank was in a difficult position as the government's expansionary fiscal policy appeared to place it at odds with the BoE's efforts to cool inflation.

"We are in a difficult, uncomfortable position, frankly, because I don't like being in a situation where you have one institution - namely the independent central bank - at least being portrayed as set against another institution, the elected government," he said on Thursday.

"Having a fiscal expansion in the context of tight supply is, I'm afraid, very difficult," he added, during a panel discussion hosted by London's North Western Reform Synagogue.

Haskel is an external member of the BoE's Monetary Policy Committee, and one of three policymakers who voted to raise interest rates by three quarters of a percentage point to 2.5% this week, rather than the half-point rise favoured by the majority.

British inflation hit a 40-year high of 10.1% in July, and the BoE has raised rates by half a percentage point at two successive rate meetings, which were its largest rate rises since 1995.

Finance minister Kwasi Kwarteng is due to give more details of the government's economic plans in a fiscal statement on Friday. He is expected to confirm around 30 billion pounds ($34 billion) of permanent tax cuts and give details of energy subsidies for households and businesses that could cost over 100 billion pounds.

Earlier on Thursday, BoE Governor Andrew Bailey wrote in a letter to Kwarteng that the household energy cap would reduce inflation in the short term but could also create medium-term price pressures.

The BoE said it would give fuller consideration to the new government's policies in its November economic forecasts.

"Taking the government at their word, what they're hoping for is that the fiscal expansion will raise the feeble rate of growth and ... if we expand the supply side of the economy, that gets us ... out of the push and pull situation," Haskel said.