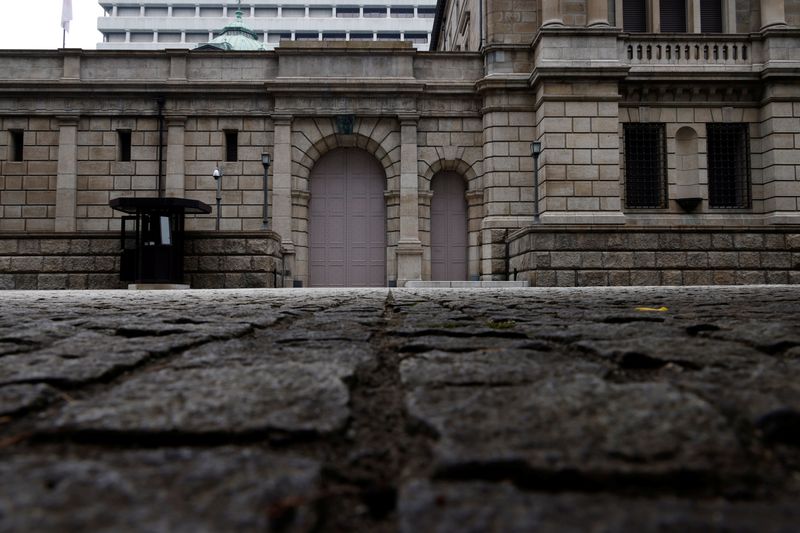 TOKYO (Reuters) -The Bank of Japan maintained ultra-low interest rates and dovish policy guidance on Thursday, as it seeks to reassure markets that it will continue to swim against a global tide of central banks tightening monetary policy to combat soaring inflation.

The decision came after the U.S. Federal Reserve delivered its third straight rate increase of 75 basis points on Wednesday and signalled more hikes, underscoring its resolve not to let up in its battle to contain inflation.

As widely expected, the BOJ kept unchanged its -0.1% target for short-term interest rates, and 0% for the 10-year government bond yield by a unanimous vote.

The central bank also decided to phase out a pandemic-relief loan scheme and instead expand a liquidity operation targeting a broader range of corporate funding-needs.

"The BOJ expects short- and long-term policy interest rates to remain at their present or lower levels," the central bank said in a statement announcing the rate decision, making no change to its dovish guidance.

The yen dropped to a 24-year low of 145.405 per dollar immediately after the BOJ announcement and traded around 144.90 subsequently.

The BOJ remains an outlier among a global wave of central banks withdrawing stimulus to battle soaring inflation, and will likely become the last major monetary authority in the world with a negative policy rate.

But Kuroda has ruled out the chance of a near-term withdrawal of stimulus on the view that wages need to rise more to sustainably achieve his 2% inflation target.

Kuroda's dovish message has worked to weaken the yen, contradicting the government's efforts to slow the currency's decline through verbal threats of yen-buying intervention.

Once welcomed for the boost it gives to exports, a weak yen has turned into a headache for Japanese policymakers as it pushes up the cost of importing already expensive fuel and raw materials.

The world's third largest economy expanded an annualised 3.5% in April-June, but its recovery has been hobbled by a resurgence in COVID-19 infections, supply constraints and rising raw material costs.