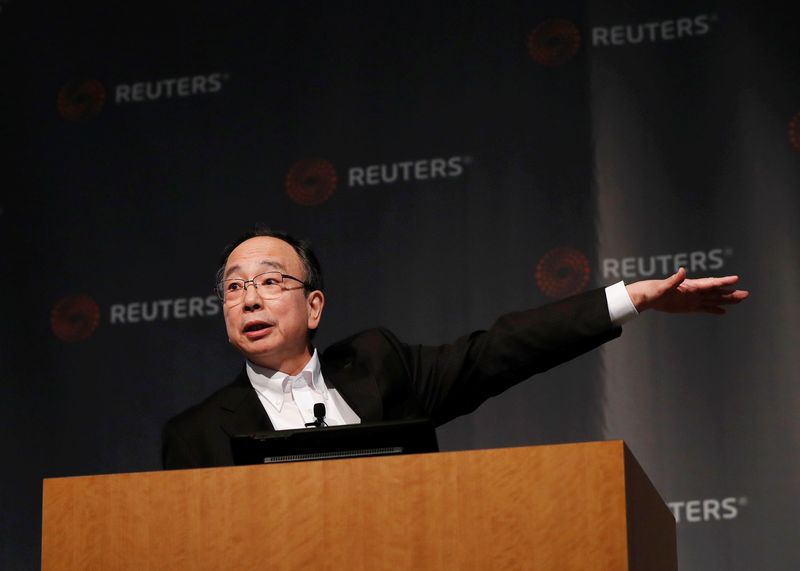 TOKYO (Reuters) -The Bank of Japan must always think about the appropriate means for exiting ultra-loose monetary policy, even if an actual lift-off will be some time away, deputy governor Masayoshi Amamiya said on Thursday.

With the economy yet to recover to pre-pandemic levels and inflation still driven mostly by rising fuel costs, the BOJ must maintain its massive stimulus for the time being, he said.

But Amamiya, who is considered among the top candidates to become next BOJ governor, said the central bank was always brainstorming tools and communication methods it could use when an end to ultra-loose policy came into sight.

"How to use our various tools, and in what order, will depend on the strength of inflation and the economy at the time. It's therefore impossible and inappropriate to lay out details of an exit in advance," Amamiya told a news conference.

"The BOJ, however, must always be thinking about what means are available to exit easy policy."

His remarks follow those by new BOJ board members Hajime Takata and Naoki Tamura, who said on Monday the central bank needed an exit strategy from its massive stimulus.

Amamiya, a mastermind of many monetary easing measures, is seen as a top contender to succeed Governor Haruhiko Kuroda when his term ends in April next year. The terms of Amamiya, and another deputy governor, Masazumi Wakatabe, expire in March.

The leadership change, accompanied by Takata and Tamura joining the nine-member BOJ board, could tilt its balance in favour of a withdrawal of Kuroda's radical stimulus, analysts say.

For now, however, Amamiya stressed the need to keep policy ultra-loose due to uncertainty whether wages would rise enough to compensate households for the increasing cost of living.

While household spending is recovering, wages must rise at a faster pace than inflation for consumption to keep increasing, Amamiya said in a speech delivered before the news conference.

"The foundations for an economic recovery remain weak and the outlook for wages is highly uncertain," Amamiya said.

Amamiya said such cost-push inflation would not trigger a withdrawal of stimulus, and stressed the need to wait until price rises were driven by strong demand and wage increases.

Japanese companies remain reluctant to raise wages on uncertainty over their business outlook.