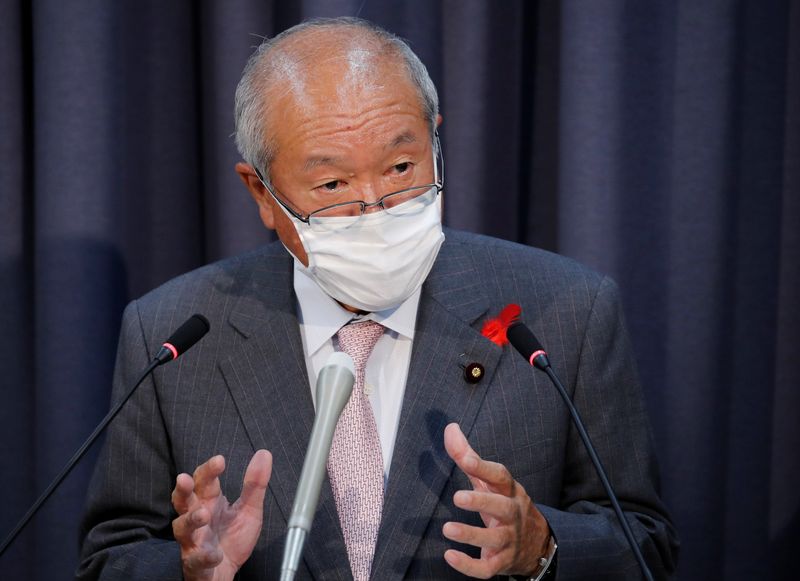 By Leika Kihara and Tetsushi Kajimoto

TOKYO (Reuters) - The Bank of Japan has no plan to allow long-term interest rates to move more widely around its 0% target to stem sharp falls in the yen, a central bank executive said on Tuesday, saying such a move would be tantamount to a rate hike.

The BOJ currently offers to buy unlimited amounts of 10-year Japanese government bonds (JGB) to defend an implicit 0.25% cap set around its 0% interest rate target, maintaining a dovish policy as part of efforts to reflate the economy.

However, steep falls in the yen as other economies eye rate hikes prompted market speculation the BOJ may widen the 50-basis-point band and tolerate further rises in long-term interest rates.

"We have no plan to widen the band," BOJ Executive Director Shinichi Uchida told parliament. "Doing so would be tantamount to an interest rate hike" and therefore undesirable for the economy, he added.

The remarks underscore the BOJ's resolve to maintain its massive stimulus programme and keep ultra-loose interest rates, a stance that could further weaken the yen.

The yen hit a fresh 20-year low of 131.34 per dollar on Monday, before recovering to around 130.10 on Tuesday, as the BOJ policy runs counter to a global shift toward monetary tightening. Central banks in the United States, Britain and Australia raised rates last week.

He said Japan will closely communicate with the United States and other Group of Seven (G7) countries in any actions it takes in response to a rapidly weakening yen.

He declined to comment, when asked in parliament whether Japan could intervene in the currency market to stem yen falls.

G7 countries have agreed that exchange rates should be determined by markets, that disorderly movements can hurt economies, and that countries will consult on any actions they take in currency markets.

Once welcomed for its boost to exports, a weak yen has emerged as a source of concern for Japanese policymakers as it inflates already rising import costs for fuel and raw material.

However, despite complaints by lawmakers, BOJ Governor Haruhiko Kuroda has stressed a weak yen is beneficial for the economy and will not trigger a rate hike.