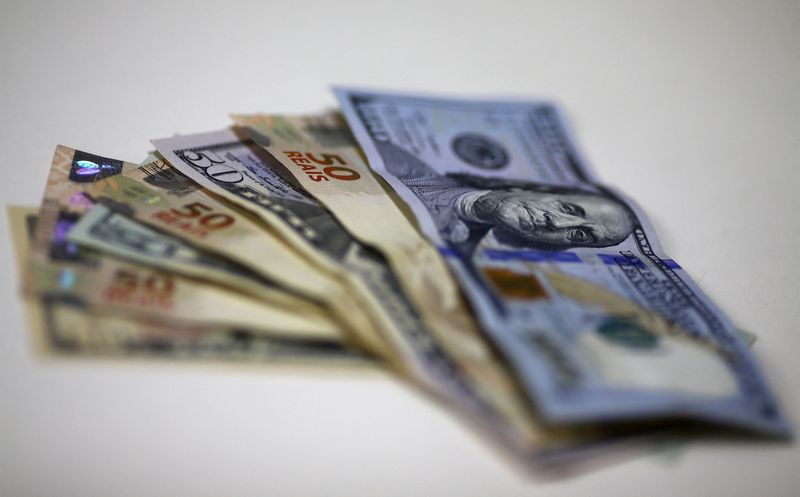 BUENOS AIRES (Reuters) - Brazil's real will stay backed up by a surprisingly good fiscal performance into the southern hemisphere summer lull as the campaign for October's presidential election begins to gather pace, a Reuters poll showed.

It oscillated around 5.60 per U.S. dollar in the fourth quarter and is expected to keep doing so, with subdued market action during the summer holiday season softening the hit of the greenback's rise following the latest hawkish Federal Reserve minutes..

According to the median estimate of 21 foreign exchange strategists polled Jan. 4-5, the real is set to strengthen 1.4% to 5.62 per dollar by end-March from 5.70 on Thursday, so long as Brazil's fiscal problems remain under control.

The country's public accounts swung to a small primary surplus in the 12 months through November, thanks to stronger-than-expected tax revenues and slower expenditures resulting from strict spending rules.

But investors worry the improvement may be only temporary after President Jair Bolsonaro's administration tweaked the fiscal framework last year to gain budget leeway for social programs before the vote.

Bolsonaro is trailing in election polls behind former President Luiz Inacio Lula da Silva, who has said he would seek to build a broad range of alliances in a bid to unite a divided country.

"Having been on a positive trajectory since 2016 and into the pandemic, it looks as though Brazil's post-pandemic policy mix could be heading in the wrong direction," said Padhraic Garvey, ING regional head of research, Americas.

"This can be categorised as a pre-election government looking to find loopholes in the constitutional spending cap and deteriorating fiscal risk premia forcing the central bank into even more aggressive rate hikes".

Brazil's central bank is leading the most aggressive policy tightening drive in the world. It raised the key interest rate to 9.25% from 2.0% in 2021 and is maintaining an orthodox view this year to fight persistently high inflation.

The real was forecast at 5.70 per dollar in 12 months, virtually flat compared to its value on Thursday at 5.70 and more solid than an expected 3.7% depreciation of the Mexican peso in the same period, to 21.3507 per dollar.

The weaker outlook for Mexico's currency rests on perceptions its central bank's rate hike cycle is still too moderate when measured up against other countries like Brazil, despite a larger than expected https://www.reuters.com/markets/us/mexican-central-bank-hikes-rates-more-than-expected-tame-inflation-2021-12-16 move last month.

(For other stories from the January Reuters foreign exchange poll:)