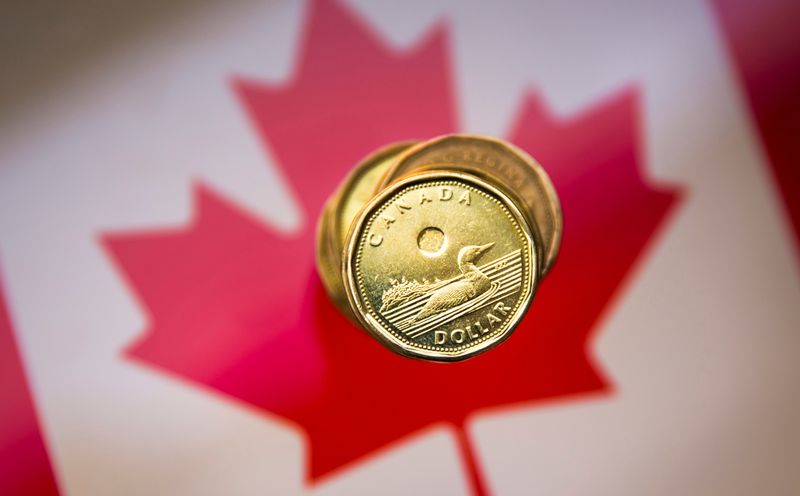 TORONTO (Reuters) - The Canadian dollar will claw back its recent decline over the coming year, as elevated oil prices bolster Canada's trade surplus and the central bank potentially hikes interest rates just as much as the U.S. Federal Reserve, a Reuters poll showed.

The loonie has lost ground since it touched 1.24 per U.S. dollar, or 80.65 U.S. cents, in April. This has occurred as the safe-haven greenback has been supported against major currencies by bets that the Federal Reserve would raise interest rates aggressively to tame inflation.

On Wednesday, the Fed hiked by half a percentage point, its biggest single move in 22 years.

Still, the Canadian dollar has fared better than most other G10 currencies in 2022, shielded by domestic economic strength, including a string of monthly trade surpluses. Data on Wednesday showed Canadian exports climbing to a record high in March.

"With the price of oil where it is, Canada's trade surplus should continue to provide good support for the loonie," said Greg Anderson, global head of foreign exchange strategy at BMO Capital Markets in New York.

"The more that the market accepts that oil north of $100 a barrel is not a spike phenomenon but is something that is longer lasting, the more that we'll see some of those petro-greenbacks converted into Canadian dollars."

Canada is a major producer of oil, which has climbed more than 40% this year as Western sanctions on Russia have disrupted supplies.

The median forecast in the poll was for the Canadian dollar to strengthen 1.3% to 1.2568 per U.S. dollar in three months' time, compared with a forecast of 1.25 in last month's poll. Over the coming year, it will climb to 1.23 per dollar, according to the latest poll.

The Bank of Canada raised interest rates by a half a percentage point on April 13. Investors are expecting several more such moves, lifting the benchmark rate to 2.50%, the middle of the central bank's so-called neutral range, by September.

A neutral interest rate is the level that a central bank estimates will neither boost nor restrain economic activity.

The BoC is one of the most hawkish of the major central banks, "maybe more so than the Fed," said Erik Nelson, a currency strategist at Wells Fargo (NYSE:WFC).

A combination of a hawkish central bank and high oil prices "to me signals Canadian dollar resilience," Nelson said.