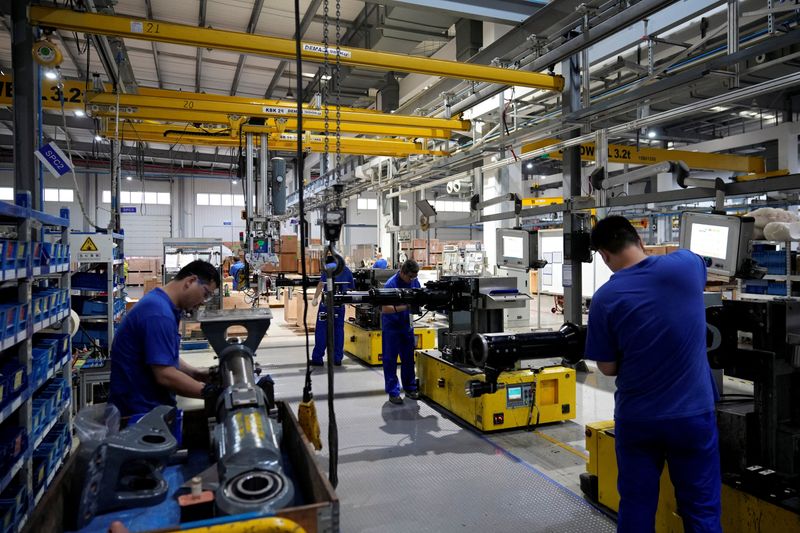 By Ryan Woo and Ellen Zhang

BEIJING (Reuters) - China will try hard to achieve the best possible results for the economy this year, state media said on Thursday after a high-level meeting of the ruling Communist Party, dropping previous calls that it will strive to meet its 2022 growth target.

In the second half, China should "stabilise employment and prices, maintain economic operations within a reasonable range, and strive to achieve the best possible results," Xinhua news agency reported, after the 25-member Politburo chaired by President Xi Jinping met to assess the economy.

The world's second-largest economy narrowly avoided contracting in the second quarter due to widespread COVID-19 lockdowns and analysts said Beijing's full-year growth target of around 5.5% had been looking increasingly unattainable.

Chinese leaders "have signalled that they won’t embark on massive stimulus just to hit the national target," Capital Economics said, while noting Beijing said it would work to stabilise the distressed property market, which has been dragging heavily on activity for the past year.

"We expect official 2022 GDP growth of at most 4% and think that, in reality, the economy may not grow at all this year."

Gross domestic product in the first half grew only 2.5% from a year earlier, pointing to huge pressure in the second half, amid fears of a global recession, uncertainties from the Ukraine war and worries of recurring COVID lockdowns.

While much of the rest of the world has been trying to live with the virus, China shown no sign of backing off from its tough zero-COVID policy.

After an April Politburo meeting, Xinhua reported China will "work hard to realise the annual economic and social development targets."

On June 22, Xi, at the opening of a BRICS forum, said China would take more measures to achieve its annual economic goals while minimising the impact of its COVID-19 prevention and control measures as much as possible.

But during an inspection tour in the central city of Wuhan on June 28, Xi said China will "strive to reach a relatively good level of the economic development this year".

Xinhua said on Thursday that large provinces must take lead in growing China's economy, and those in a position to achieve their economic goals should do so.

"The government did not say what the relationship between the 'best possible' results and the around 5.5% GDP target is," said Qu Qing, head of investment consulting at Huachuang Securities.

"Instead, the 'best possible' results mean local economies should do their utmost to hit their economic goals."

Qu does not expect massive new policies in the second half of the year, saying the focus will be on the implementation of previous measures.