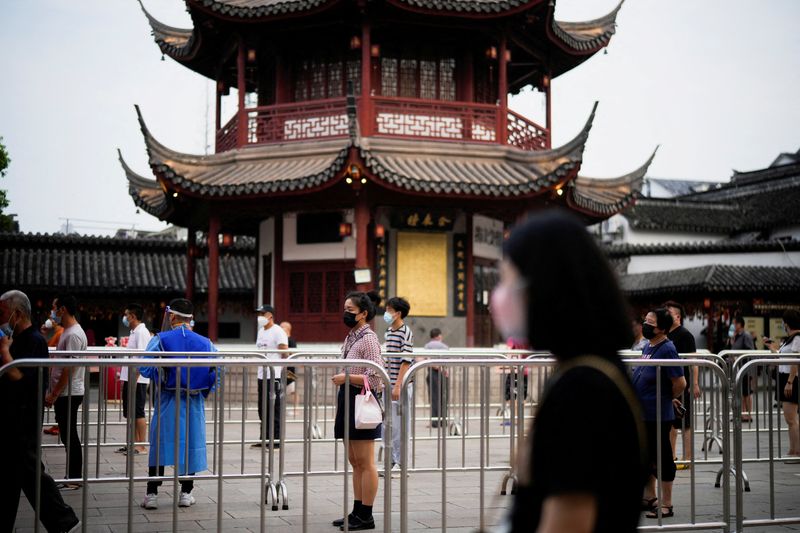 By Jorgelina do Rosario, Karin Strohecker and Rodrigo Campos

LONDON (Reuters) - China needs to rethink its zero-COVID policy to avoid more harm to the economy, as well as come up with a long-term solution to the crisis in the real estate sector, a senior International Monetary Fund (IMF) official said in an interview.

The world's second-largest economy has been tweaking its stringent COVID-19 curbs while leaving residents and businesses facing uncertainty over the risk of future lockdowns.

Krishna Srinivasan, director of the Asia and Pacific Department at the IMF, told Reuters that China could avoid further lockdowns if it uses "effective vaccines, such as mRNA vaccines", and boosts vaccination, especially among older people.

"China has made some changes in terms of making it a bit more flexible, but we feel that this strategy could be a drag on the economy," Srinivasan said. "This is an issue which needs to be addressed."

While China has avoided the ravages of widespread infections and deaths, it lacks herd immunity, with its vast elderly population especially exposed.

China's COVID strategy was one of the reasons why the IMF cut the country's 2022 gross domestic product (GDP) growth forecast to 3.3% from 4.4% in its latest World Economic Outlook (WEO) published this week.

This would be the country's lowest growth in more than four decades, excluding during the initial COVID-19 crisis in 2020, the WEO report added.

China's COVID policy is not the only factor behind the IMF's concerns over the economic slowdown. Rising home prices and surging household debt have been fuelling a crisis in the real estate sector.

"The intention of the government to reduce leverage in the real estate sector was completely right, but it has been a drag on growth," Srinivasan said. "Now many households are refusing to pay their mortgages because there are many housing projects which have not been finished."

Sources told Reuters on Monday that China will launch a real estate fund to help property developers resolve a crippling debt crisis, aiming for a war chest of up to 300 billion yuan ($44 billion).

It would be the first major step by the state to rescue the property sector since debt troubles became public last year.

Srinivasan said the measure was a "fix" but added the amount might not be enough and urged Beijing to look for sustainable long-term solutions.

"You need to know which developers face what kind of constraint and how many of them are viable," he said. "The strategy needs to be fully fleshed out, and that's what is lacking right now."