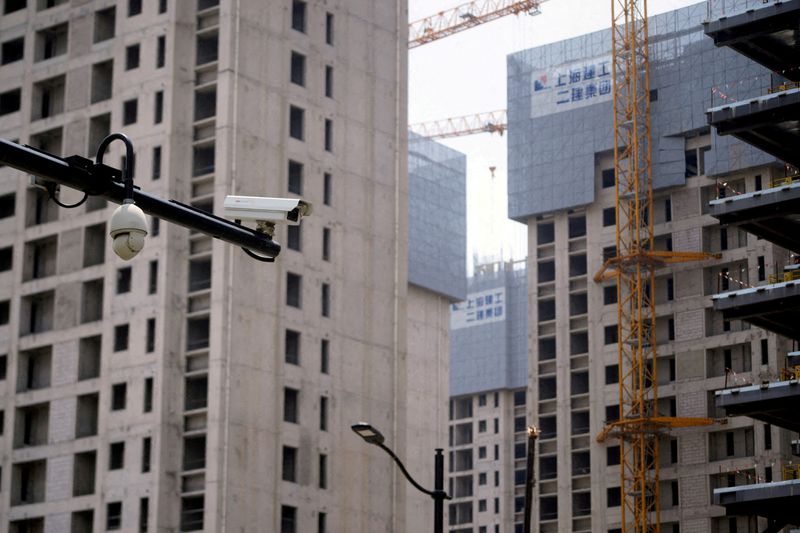 BEIJING (Reuters) - China's October new home prices fell at their fastest pace in over seven years in a deepening contraction induced by COVID-19 curbs and a liquidity crisis that in recent days had forced authorities to increasingly ramp up supportive policies.

On an annual basis, new home prices slumped 1.6%, the fastest pace since August 2015, worsening from the 1.5% year-on-year fall in September and marking the sixth month of contraction.

New home prices declined 0.3% month-on-month, easing 0.2% in September, according to Reuters calculations based on National Bureau of Statistics (NBS) data.

The property sector has struggled with defaults and stalled projects since authorities started to clamp down on excessive leverage in mid-2020, hitting market confidence and weighing on economic activity.

But a recent package outlined by Chinese regulators to boost liquidity in the sector, which accounts for roughly a quarter of China's $17 trillion economy, has fuelled optimism about the outlook and underpinned market sentiment.

Out of the 70 cities surveyed by NBS, 58 reported month-on-month price falls in October, up from 54 cities in September.

"Despite Beijing's efforts to fine-tune its zero-Covid strategy and reverse most of its clampdowns on property financing, the downward pressure on growth could strengthen," analysts at Nomura said in a research note.

The softer data comes even as Beijing rolled out a flurry of policies to revive the sector in September, including relaxing mortgage rates and refunding individual income tax for some homebuyers.

Data on Tuesday also pointed to further weakness in the cash-strapped sector, showing real estate investment fell at its fastest pace in 32 months in October.

A notice to financial institutions from the People's Bank of China (PBOC) and the China Banking and Insurance Regulatory Commission (CBIRC) outlined 16 steps to support the industry, including loan repayment extensions, sources said on Sunday.