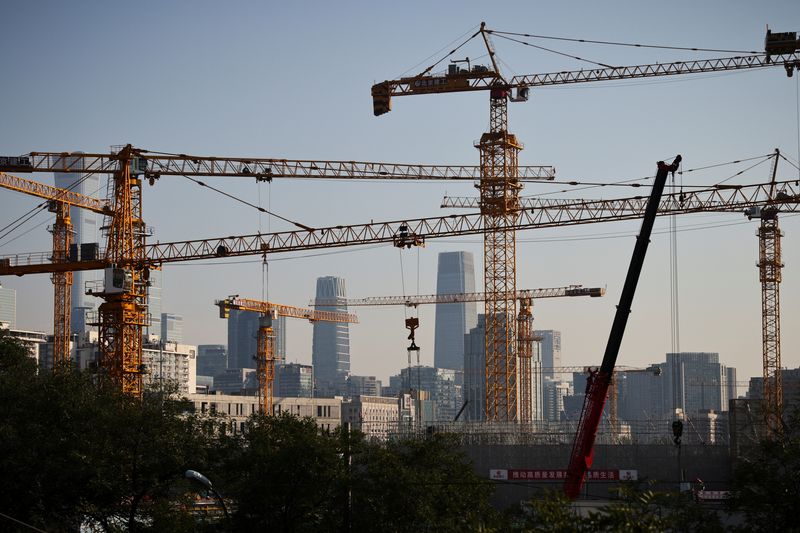 BEIJING (Reuters) - China's economy stabilised somewhat in May after a sharp slump the previous month as industrial production rose unexpectedly, but consumption was still weak and underlined the challenge for policymakers amid the persistent drag from strict COVID curbs.

The data, however, points to a partial recovery in the world's second-biggest economy after businesses and consumers were hit hard due to full or partial lockdowns in dozens of cities in March and April, including a protracted shutdown in commercial centre Shanghai.

Industrial output grew 0.7% in May from a year earlier, after falling 2.9% in April, data from the National Bureau of Statistics (NBS) showed on Wednesday. That compared with a 0.7% drop expected by analysts in a Reuters poll.

As shoppers were confined to their homes in Shanghai and other cities, retail sales were still down 6.7%, though better the forecast drop in the poll and an improvement from a 11.1% slump in April.

According to the China Passenger Car Association, the country sold 1.37 million passenger cars last month, down 17.3% from a year earlier, narrowing the decline of 35.7% in April.

Fixed asset investment, a key indicator tracked policymakers looking to prop up the economy, rose 6.2% in the first five months, compared with an expected 6.0% rise and a 6.8% gain in the first four months.

The government has been accelerating infrastructure spending to boost investment. China's cabinet has also announced a package of 33 measures covering fiscal, financial, investment and industrial policies to revive its pandemic-ravaged economy.

The nationwide survey-based jobless rate fell to 5.9% in May from 6.1% in April, above the government's 2022 target of below 5.5%. However, the surveyed jobless rate in 31 major cities jumped to 6.9%, the highest on record.

Some economists expect employment to worsen before it gets better, with a record number of graduates entering the workforce in summer.

China has set an annual economic growth target of around 5.5% this year but many economists believe that is increasingly out of reach.

While the world's biggest manufacturer reported better-than-expected export growth in May, driven partly by the delivery of postponed export orders in the past, the subdued external demand due to the Ukraine war and robust production recovery of Southeast Asian nations threaten the country's trade outlook.

One week after the reopening of Shanghai, the local government ordered 15 of the city’s 16 districts to undertake mass testing to contain a jump in cases tied to a hair salon.

The capital city of Beijing is grappling with an "explosive" and "ferocious" COVID-19 outbreak connected to a bar, with authorities immediately shutting down all entertainment venues in the city's most populous district of Chaoyang last week.

Any potential lockdown and supply chain disruption risks amid future COVID outbreaks may constrain the rebound of the economy as Beijing has shown no sign of easing its zero-COVID policy, analysts say.