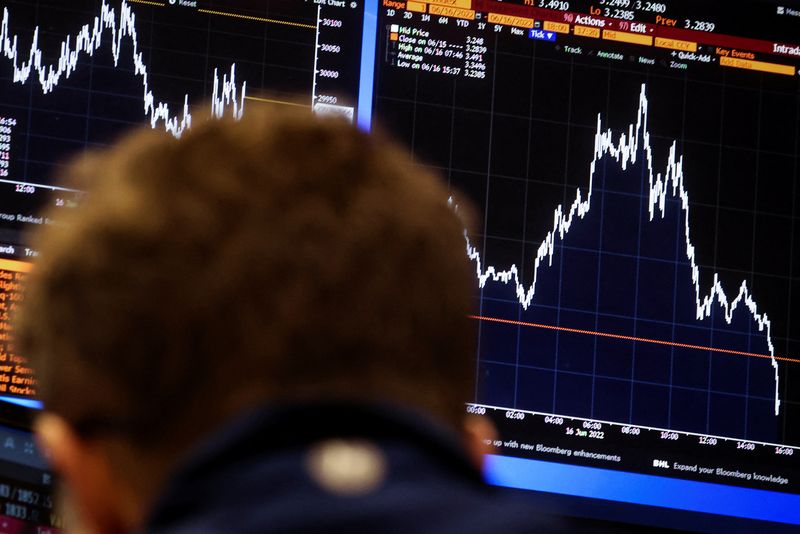 Without a doubt, stocks are far cheaper than at the start of the year, following a 23% year-to-date decline in the S&P 500 that confirmed a bear market for the index earlier this week.

Whether they are cheap enough, however, is less certain. Market volatility and a rapidly changing macroeconomic landscape have clouded metrics that investors typically use to value stocks, such as corporate earnings and Treasury yields, keeping some potential buyers on the sideline.

Stocks came under more pressure this week, with the S&P 500 falling to its lowest since late 2020, in the wake of the Fed enacting its largest rate-hike in nearly three decades.

This year's decline lowered the index's forward price-to-earnings ratio, which compares its price with its expected profits, to 17.3, from 21.7 at the start of 2022 – closer to the market's historic average of 15.5, according to Refinitiv Datastream.

But while S&P 500 earnings are expected to rise nearly 10% in 2022, according to Refinitiv IBES, some market participants doubt those estimates will hold up in the face of surging inflation and tightening financial conditions.

Wells Fargo institute strategists forecast positive but slowing earnings growth this year and a contraction in 2023, as they expect a recession in late 2022 and early 2023.

"We are advocating to investors to consider an economy and an earnings backdrop that may be more challenging ... so just don't be fooled by where valuations are based off of today's expectations," said Chad Morganlander, portfolio manager at Washington Crossing Advisors, who is recommending clients continue to underweight equities.

Morgan Stanley (NYSE:MS) analysts expect earnings to come in between 3-5% below consensus views, leading them to forecast that the S&P 500 is likely to see a "more reliable level of support" at 3,400, some 8% below Friday's level, they wrote earlier this week.

U.S. Treasury yields also play an important role in standard valuation models. Since U.S. debt is seen as a relatively risk-free investment, rising yields tend to dull the allure of stocks, as they weaken the value of future cash flows in standard models.

Yet shifting expectations for how hawkish the Fed will need to be to fight inflation have made yields exceptionally volatile in recent weeks, making that calculus harder for investors.

The benchmark 10-year Treasury yield has traded in a nearly 35 basis point range just this week, while the ICE (NYSE:ICE) BoFAML MOVE Index, which measures Treasury market volatility, stands at its highest level since March 2020.

Broadly speaking, "the risk-free rate rising like it has is a headwind for equity indexes as well as individual equities," Morganlander said.

Some investors believe stocks have fallen low enough to start dipping in.

Peter Essele, head of portfolio management for Commonwealth Financial Network, is advising clients to gradually begin buying stocks, projecting that an oversupply of home-furnishing and other consumer goods along with changing demand preferences will end up moderating prices.

"I just think that equities have inflation wrong," Essele said.

Fed Chair Jerome Powell, who this week called inflation "much too high," will give an updated view on the environment when he testifies next week before a U.S. Senate committee.

Robert Pavlik, senior portfolio manager at Dakota Wealth, believes an inflation fix may not be imminent. He has lower-than-typical equity exposure in portfolios he manages and is more heavily weighted to defensive stocks and those linked to inflation such as energy.

"I want to be convinced that inflation is showing signs of slowing down," Pavlik said. "Until then, I am waiting on the sidelines with extra cash."