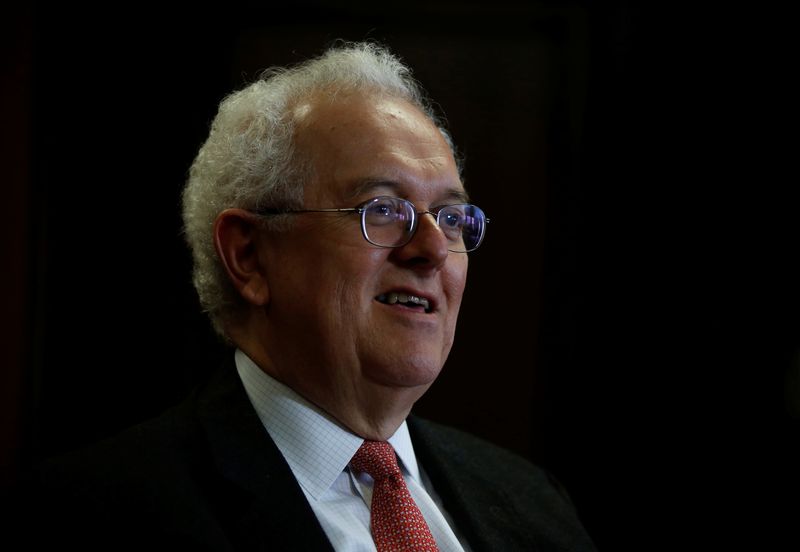 © Reuters. FILE PHOTO: Jose Antonio Ocampo, member of the board of the central bank of Colombia, speaks during an interview with Reuters in Bogota, Colombia August 10, 2017. REUTERS/Jaime Saldarriaga

BOGOTA (Reuters) - Colombia will continue to reduce its fiscal deficit but may need another year to reach the target laid out for 2023 in order to finance social needs, incoming Finance Minister Jose Antonio Ocampo said on Tuesday.

The raft of social programs promised by President-elect Gustavo Petro, who will take office on Sunday, are also supposed to be financed with tax reforms, including an initial 25 trillion peso ($5.8 billion) bill the incoming government will propose on Monday.

The country's current fiscal deficit plans - overseen by its fiscal rule committee in an effort to prevent deterioration of public finances - include a 3.6% of gross domestic product target for 2023 and a 5.6% of GDP target for this year.

"If we need another year, that's all I think we would need, depending on the magnitude of the resources we manage to obtain in the tax reform," Ocampo told Reuters in an interview.

"Not the current (fiscal deficit) levels, with a downward trend but closing in during one more year ... something a bit more gradual so basically we can respond to social demands," said 69-year-old Ocampo, who has a Phd in economics from Yale.

Petro has promised to tackle deep inequality with pension redistributions, free university education and other programs.

Some of his proposals - especially a freeze on new development of oil, Colombia's top export - have caused market jitters.

The appointment of Ocampo - one of Colombia's most celebrated economists who previously served as agriculture minister, finance minister and director of national planning - may assuage some of those worries.

Petro's policies are "impossible" to carry out without the tax reform, Ocampo said.

"We are going for perhaps, I would say around 25 trillion (pesos) initially and a gradual increase. A big part of the gradual increase is through the fight against evasion, which is enormous in Colombia," he said.

The new government plans to increase the proposed $91 billion budget for next year to fund social investment, he added.

The Andean country will not seek international market financing in the short term because of high debt costs, Ocampo said, looking instead to the local market and multilateral organizations.