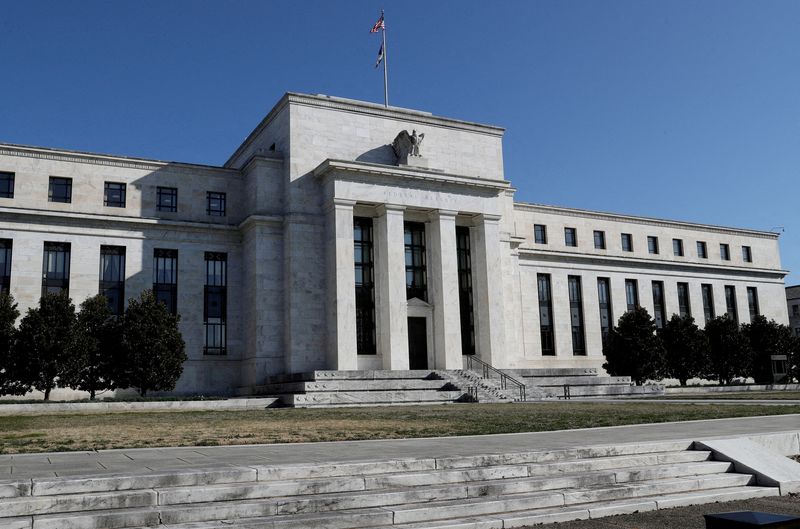 LONDON (Reuters) - If central banks start draining the money pool to stop an overspill buoying sky-high inflation, the assessment of just how much liquidity is 'excess' becomes critical to world markets.

A hawkish new year blitz from the U.S. Federal Reserve in the face of 7% inflation and near full employment readings stateside has markets scrambling to price as many as four U.S. interest rate rises this year.

But more pressing for many in financial markets are Fed signals that it's already time to siphon off some of the money it flooded into the banking system via emergency bond buying - money aimed at keeping the wider economy afloat during the shocking pandemic lockdowns.

Surprising many investors, the Fed discussion on shrinking its bloated $8.7 trillion balance sheet began at its December policy meeting while it agreed to gradually end new bond buying in the first quarter of 2022.

While the apparent urgency to start shrinking its balance sheet seems odd against plans to keep adding more to it until March, many Fed officials have already this year insisted the process needs to start soon. But when and how fast?

In an interview with Reuters this week, Atlanta Fed chief Raphael Bostic was most explicit.

Bostic reckoned the runoff - which would at first just involve allowing the Fed's bond holdings to mature without reinvesting the proceeds - should start shortly after the first interest rate rise in March.

But he also said this so-called 'quantitative tightening' (QT) should be forceful at $100 billion a month, twice the monthly pace of the last balance sheet reduction in 2017-2019, and he identified $1.5 trillion of pure 'excess liquidity' that needed to be taken out before assessing the impact at that point.

It wasn't clear where Bostic plucked the $1.5 trillion figure from, but it's roughly equivalent to what the Fed has been forced to drain from the money markets every day in recent weeks via overnight 'reverse repo' operations.

On Wednesday, Cleveland Fed chief Loretta Mester - a voting member of the Fed's policymaking Open Market Committee this year - chimed with Bostic and told the Wall Street Journal she felt the balance sheet should be cut as fast as possible without disrupting markets. But she went one further by saying the Fed should not exclude the option of actively selling its assets.

So, the Fed appears pretty serious about this all of a sudden and market number crunchers have been working overtime.

JPMorgan (NYSE:JPM)'s flows and liquidity specialist Nikolaos Panigirtzoglou and team conclude that the peak of what they see as global 'excess money supply' is now far behind us and its proxies for broad liquidity will shrink significantly over the next two years.

The JPM team now sees Fed QT in July after the second rate rise and, assuming it reaches a $100 billion monthly runoff pace of Treasury and agency bonds by the end of this year, then the market would need to absorb an additional $350 billion of new debt from government and agency borrowers in the second half of 2022 and about $1 trillion in 2023.

Fanning that out to its measure of net global bond supply versus demand - it now sees that position deteriorating by some $1.3 trillion this year relative to 2021. And based on historical correlations, JPM reckons that should typically see yields on global bond aggregate indices rise by an additional 35 basis points.

Another direct impact on liquidity of Fed QT is cutting commercial banks' reserve balances held at the Fed and hence their lending capacity. While globally this will be offset this year by ongoing European Central Bank and Bank of Japan bond buying, JPM reckons it will bite harder in 2023 when those central banks wind down new bond purchases closer to zero.

As a result of a drop in central bank bond buying flows and slowing world loan demand from pandemic peaks, they see their estimate of global money supply growth more than halve to $3 trillion in 2023 from a $7.5 trillion pace last year and returning to annual money growth levels not seen since 2010.

Will this have burnt off estimates of 'excess'? Looking at global proxies for 'excess' measuring world money growth against nominal GDP or the ratio of cash held as a share of household equity and bond holdings, JPM reckons the excess is already gone.

All under control? Will this be enough to rein in inflation and runaway markets?

Amundi's Chief Investment Officer Pascal Blanque believes we will see a new inflationary regime like the 1970s mainly because governments will simply have to assume greater control of money and borrowing rates from their central banks - with post-COVID reconstruction and climate change demanding fiscal expansion.

"In this new regime, governments will take over the control of money while maintaining widespread and double-digit monetary growth for several years, as part of a broader transition from free market forces, independent central banks and rule-based policies to a command-orientated economy."

Blanque reckons the reason rising money supply did not spur inflation over the past decade was because a plunge in the so-called velocity of money - or the rate at which one dollar is used in transactions - in the real economy merely transferred to financial assets.

Taking real and inflation spheres as one, then velocity may have been as stable as monetary theories assume, he wrote, and ongoing money pumping will prove inflationary eventually - even coincidentally for periods in both consumer and asset prices, as now.

The author is editor-at-large for finance and markets at Reuters News. Any views expressed here are his own