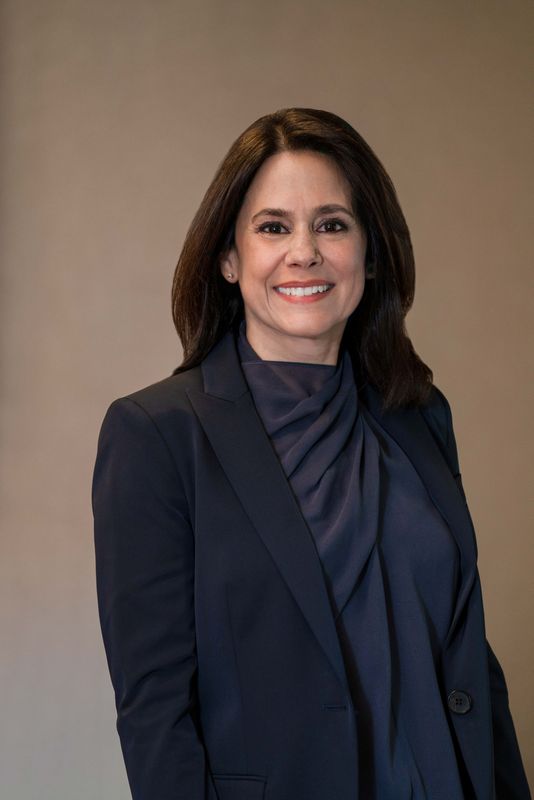 © Reuters. Lorie K. Logan, the newly appointed Federal Reserve Bank of Dallas president and chief executive, is pictured in this undated handout image, obtained on May 11, 2022. Dallas Fed/Handout via REUTERS

(Reuters) -The Dallas Federal Reserve on Wednesday named Lorie Logan as its next president, filling the vacancy left by Robert Kaplan's departure last fall after an outcry over the ethics of his active stocks trading during the coronavirus pandemic.

Logan, an executive vice president at the New York Fed and the manager of the Fed's System Open Market Account, will start her new job on Aug. 22, the Dallas Fed said in a statement.

The U.S. central bank is in the midst of its most rapid policy tightening in decades to deal with inflation that is rising at its fastest pace since the early 1980s. Data released on Wednesday showed consumer prices rose at an annual pace of 8.3% in April.

Logan, 49, will join the presidents of the 11 other regional Fed banks and the Washington-based Fed Board of Governors in setting monetary policy for the world's biggest economy. Her first policy meeting will be on Sept. 20-21.

She will be the Dallas Fed's first permanent female chief.

A senior official in the New York Fed's markets division since 2012, Logan currently manages the central bank's $9 trillion portfolio of securities, cash and other assets.

Those holdings roughly doubled during the pandemic as the Fed sought to ease financial conditions and bolster the economy, and under Logan the Fed is now poised to trim those assets, beginning next month, as part of its overall bid to raise U.S. borrowing costs and slow growth.

"Lorie is a trusted colleague and dedicated public servant whose remarkable skill and experience with complex financial markets has informed our decisions and helped implement monetary policy to support the U.S. economy," Fed Chair Jerome Powell said in the statement.

Powell has signaled that he and fellow policymakers will likely follow last week's half-percentage-point interest rate hike with at least two more hikes of the same size at upcoming policy meetings.

The aim of the rises in borrowing costs is to slow household demand for goods and services and business demand for workers fast enough to cool price and wage pressures and bring inflation down to the Fed's 2% target.

Fed policymakers hope that can be done without undercutting the strong labor market or sending the economy into a prolonged downturn.

As a Fed insider and a markets expert, Logan is a departure from the Dallas Fed's last two presidents, both of whom came from outside the U.S. central bank's system.

Meredith (NYSE:MDP) Black has run the Dallas Fed on an interim basis since October after Kaplan, along with Boston Fed President Eric Rosengren, retired before their terms were out. They stepped down amid revelations of personal trading even as the Fed was buying trillions of dollars of assets to stabilize markets, lifting the prices of the kinds of securities that both men were trading.

Four other Fed banks also have women leaders, including incoming Boston Fed President Susan Collins, currently provost of the University of Michigan. She will be the first Black woman to serve as a Fed bank chief when she starts on July 1.

U.S. Senator Bob Menendez and fellow lawmaker Raul Ruiz, a U.S. representative, said they were disappointed the Dallas Fed board did not pick what could have been the Fed's first Latino policymaker.

"It missed an opportunity," they wrote.