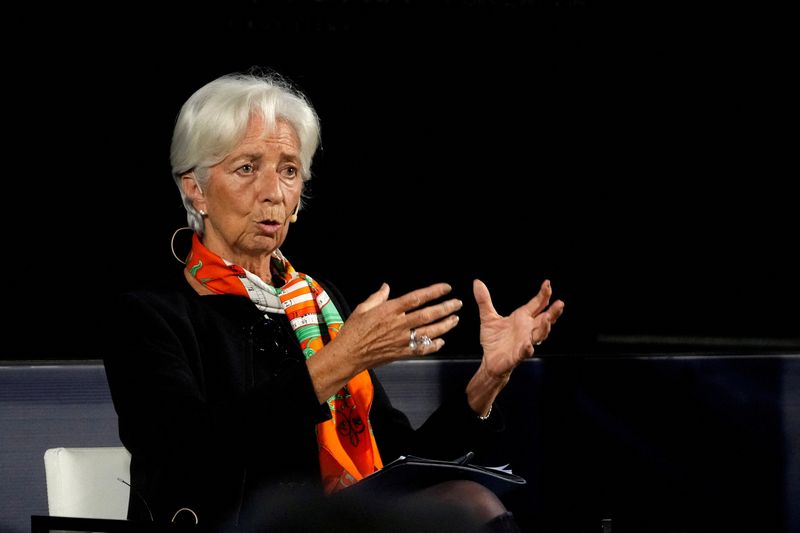 Having raised rates by 200 basis points to fight double-digit inflation, the ECB has been tightening policy at the fastest pace on record and more moves are still in the pipeline, even if some of the comments on Friday suggest a slowdown.

Speaking in quick succession at a major financial conference in Frankfurt, ECB President Christine Lagarde, Bundesbank President Joachim Nagel and Dutch central bank Governor Klaas Knot all made the case for lifting the ECB's 1.5% deposit rate into "restrictive" territory, a level commonly seen as above 2% where the bank puts a brake on growth.

They also argued for the need to start winding down the bank's massive pile of government debt, hoovered up over the past decade when the ECB was still fighting anaemic inflation.

But the comments also contained plenty of nuance, which some saw as signalling a potential compromise between conservatives, who are pushing for rapid tightening, and a small number of policy "doves", mostly from the bloc's southern periphery.

"As the stance of monetary policy tightens further, it will become more likely that the pace of (rate) increases will slow," Knot said in a speech.

A slowdown after back-to-back 75 basis point hikes would not be a surprise given that the ECB already claimed "substantial progress" in policy tightening, but the comments from a key hawk are still likely to temper rate hike expectations.

Nagel meanwhile made the case for beginning the bond run-off at the start of 2023, an earlier date than advocated by most others, suggesting that more modest rate hikes could be coupled with a quicker start of quantitative tightening.

"We should start reducing the size of our bond holdings at the beginning of next year by no longer fully reinvesting all maturing bonds," Nagel said.

TS Lombard analyst Davide Oneglia saw a compromise taking shape focused on the balance sheet run-off, also known at quantitative tightening or QT, even if the ECB is set to maintain its bias for overtightening.

"The 'grand bargain' between hawks and doves in the ECB Governing Council is shaping up ahead of the December meeting, which could mean slower hikes in exchange for earlier and/or faster QT," he said.

Knot also advocated a quick start to the debt run off, arguing that it would cut inflation and lower the required peak interest rate to control price growth.

Still, ECB chief Lagarde said rates will remain the ECB's primary policy tool and the balance sheet run off is more likely to take place in the background.

"Acknowledging that interest rates remain the most effective tool for shaping our policy stance, it is appropriate that the balance sheet is normalised in a measured and predictable way," she said.

Reinforcing views that quantitative tightening would be on auto pilot, Knot said it should be as predictable and boring as "watching paint dry."

The ECB has little experience with the effect of reducing its balance sheet, which is just shy of 9 trillion euros.

However, in the first repayment possibility under the new terms, only 296 billion or 14% of such loans were repaid, far below the roughly 500 billion expected by markets, suggesting that balance sheet action is more unpredictable than rate moves.