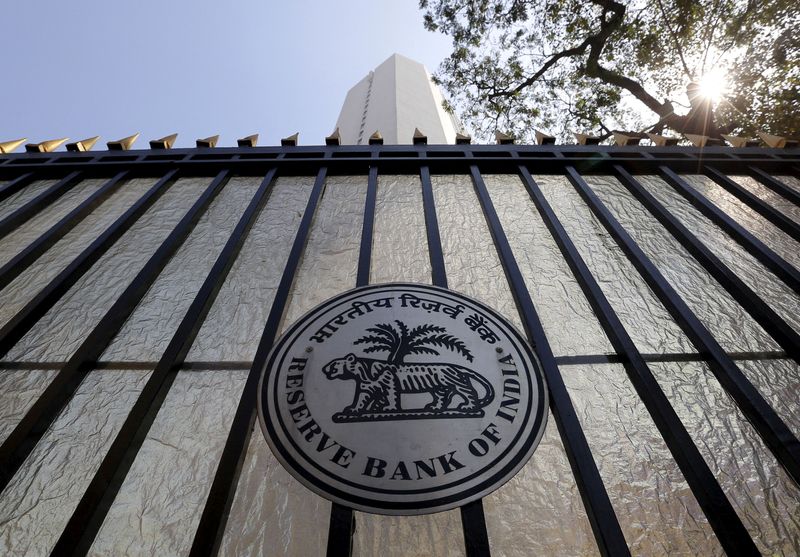 © Reuters. FILE PHOTO: The Reserve Bank of India (RBI) seal is pictured on a gate outside the RBI headquarters in Mumbai, India, February 2, 2016. REUTERS/Danish Siddiqui

By Manoj Kumar and Aftab Ahmed

NEW DELHI (Reuters) - India's central bank is expected to frontload more aggressive interest rate hikes in its effort to tame high inflation, at least until its repo rate hits its pre-COVID level of 5.15%, economists said after a long-anticipated rate hike on Wednesday.

Most economists are now forecasting a cumulative 125-150 basis points of rate hikes over the next 12 months, compared with about 50 basis points expected three months ago, on the grounds that inflation could remain around 7% for at least three months more due to soaring global energy, food, and manufacturing prices.

The Reserve Bank of India's Monetary Policy Committee (MPC) raised the benchmark repo rate - the rate at which it lends to banks - by 40 basis points to 4.40% in its first rate hike in nearly four years, while raising banks' cash reserve ratio by 50 basis points to mop up about $11.4 billion in surplus liquidity from the market.

"We believe the rate hike is a belated acknowledgement of the inflation risks and that policy has been behind the curve," Sonal Varma, chief economist at Nomura, wrote in a note to clients.

Nomura expects retail inflation to remain at 6.6% year-on-year in the fiscal year that began in April and has raised its forecast for the main interest rate to 5.75% by December from its earlier projection of 5%, and to 6.25% by the second quarter of 2023, up from a previous 6%.

It has pencilled in a rate hike of 35 basis points at the RBI's MPC meeting in June followed by a 50 basis-point hike in August and 25 basis-point moves at the following meetings until next April.

Many private economists said that unlike some other central banks the RBI had remained in denial for some time, ignoring inflationary pressures that pushed retail inflation to near 7% in March, with indications that it could remain above the central bank's tolerance band for two quarters.

Inflation in most countries has soared to multi-year highs, driven by a rebound in economic activity and a further straining of rampant supply chain disruptions in the wake of Russia's invasion of Ukraine, forcing many central banks to raise benchmark rates.

Shilan Shah, economist at Singapore-based Capital Economist, said the RBI's move will slow down the pace of rising prices. He now expects the repo rate to rise to 5.65% this year, up from his earlier expectation of 5%.

"Our current growth forecast of 7.4-7.5% is likely to go down by further 25 basis points on account of the higher borrowing cost to curtail demand," said Dipanwita Mazumdar, economist at state-run lender Bank of Baroda.

Mazumdar expects another rate hike of 50-70 basis points in the current fiscal year.

Some economists said the government needs to cut taxes on petrol and diesel - the highest among the major economies - to dampen inflationary pressures as it was making things costlier for everyone.