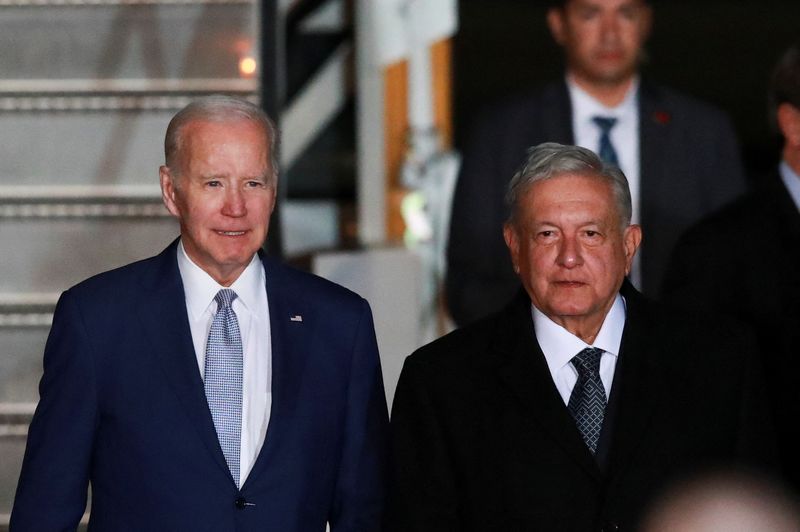 By Dave Graham and Jarrett Renshaw

Lopez Obrador accompanied Biden from the airport to his hotel, and said the two broached issues they would discuss on Monday, including regional economic cooperation and migration.

"Integration needs to be strengthened," Lopez Obrador told a news conference, saying he expected to reach "good agreements" with Biden.

Lopez Obrador is hosting Biden and Canadian Prime Minister Justin Trudeau between Monday and Wednesday for the first summit between the three since late 2021. Trudeau is arriving on Monday afternoon, with trilateral leaders' talks due on Tuesday.

The three leaders are expected to talk about deepening economic ties, even as disagreements persist over Lopez Obrador's nationalist energy policies which led to Washington and Ottawa launching a formal trade complaint in July.

Since the COVID-19 pandemic battered supply chains, policymakers have stepped up calls for firms to relocate business from Asia to beef up the economy covered by the United States-Mexico-Canada (USMCA) regional trade agreement.

Lopez Obrador has also alarmed the United States with a plan to prohibit imports of genetically-modified corn. Mexico agreed to delay the ban until 2025, but the issue is likely to surface. The three trading partners have also been at loggerheads over auto rules of origin.

"To create a North American corridor to outcompete China, the United States, Canada and Mexico need to be on the same economic page," he added.

Lopez Obrador, a combative leftist, says his energy policy is a matter of national sovereignty, arguing that past governments skewed the market to favor private interests.

The United States and Canada say their firms have been disadvantaged by Lopez Obrador's campaign to give control of the market to his cash-strapped state energy companies, and the row has taken the shine off the outlook for investment.

Trudeau told Reuters on Friday he would make the case that resolving the energy dispute would help bring more foreign capital to Mexico, and was confident of making progress.

As part of that drive, Lopez Obrador, who in June snubbed Biden's invitation to the Summit of the Americas in Los Angeles in protest at his exclusion of the leaders of Cuba, Venezuela and Nicaragua, wants to discuss his plan to boost solar power in northern Mexico and secure U.S. financial support for it.

That plan to generate solar power in the northern border state of Sonora would be discussed on Monday, Mexico said.

Mexico has also urged the United States to commit funds to Central America and southern Mexico to boost development and stem migration from what has long been a poor region, and to make it easier for migrants to get U.S. jobs.