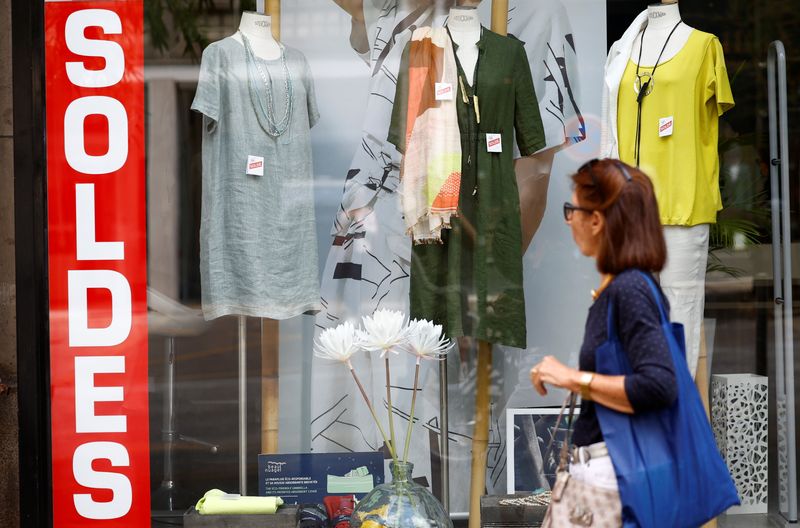 © Reuters. FILE PHOTO: A woman looks at a shop window with a sign reading "Sales"on the eve of the start of summer sales in Nantes, France, June 21, 2022. REUTERS/Stephane Mahe

By Jan Strupczewski and Balazs Koranyi

BRUSSELS/FRANKFURT (Reuters) - The euro zone economy grew much faster than expected in the second quarter, but economists said it might be the economy's last hurrah before ever-higher inflation and supply chain problems cause a mild recession in the second half of the year.

The stronger growth came despite stagnation in the bloc's biggest economy Germany, where high inflation and fears of a gas crisis triggered by the war in Ukraine have caused consumer and business sentiment to plummet, economists said.

Meanwhile, inflation rose to another record high in July and its peak could still be months away, keeping pressure on the European Central Bank to opt for another big interest rate increase in September.

Consumer price growth in the 19 countries sharing the euro currency accelerated to 8.9% in July from 8.6% a month earlier, far above expectations for 8.6% and well clear of the ECB's 2% target, Eurostat said.

"The acceleration in economic growth is mainly due to reopening effects and masks underlying weakness due to high inflation and manufacturing problems," ING economist Bert Colijn said.

"From here on, we expect GDP to continue a downward trend as the services reopening rebound moderates, global demand softens and purchasing power squeezes persist. We expect that to result in a mild recession starting in the second half of the year," he said.

The poor performance of the German economy was offset by much stronger than expected expansions elsewhere in the bloc with France's economy growing 0.5% on the quarter, Italy expanding by 1.0% and Spain achieving a 1.1% increase.

The good euro zone growth performance in the second quarter combined with the rising inflationary pressure increased the probability that the ECB would raise interest rates by 50 basis points again in September, rather than go for a smaller hike.

"With inflation not showing any signs of cooling off in the short term and with the economic outlook not yet derailing, we expect another 50bps increase in September from the ECB," Nicola Nobile at Oxford Economics said.

Looming over all of Europe's economies is the war in Ukraine. Uncertainty over the course of the conflict has knocked consumer and business confidence while fears remain that a full cut-off of Russian gas supplies would plunge the bloc into a much deeper downturn.