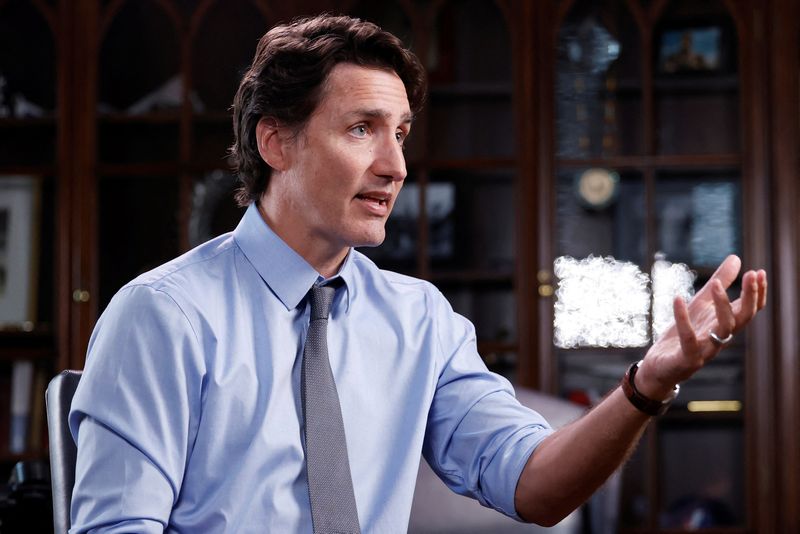 OTTAWA (Reuters) - Canada and the United States are going to argue at a North American leaders' summit next week that resolving a dispute over measures that favor Mexican energy companies would help draw more foreign investment to Mexico, Prime Minister Justin Trudeau said on Friday.

"Both (U.S) President (Joe) Biden and I are going to be... fairly clear with President (Andres Manuel) Lopez Obrador that this... needs to be understood as a way to help Mexico develop, a way to continue to draw in investments from companies in Canada and the United States," Trudeau told Reuters.

Asked if he hoped to make progress at the summit in Mexico City, Trudeau said: "Absolutely".

The United States and Canada entered into dispute settlement talks last year with Mexico under a North American trade deal, known as the USMCA, charging that Mexican energy policies were discriminatory and undermine international firms.

Trudeau will arrive in Mexico City on Monday for a three-day visit, which will include bilateral meetings with both Biden and Lopez Obrador. He will meet with business leaders from all three countries on Monday.

"I understand he wants to put more of an emphasis on the state-owned energy companies," Trudeau said in his office in Ottawa, "but it has to be done in a responsible way, in a way that understands that he's a part of (USMCA) and he has to abide by those rules."

The United States and Canada are challenging amendments to Mexican legislation that prioritize distribution of CFE-generated power over cleaner sources of energy provided by private-sector suppliers, such as wind and solar.

"Canadian companies invested about C$13 billion ($9.7 billion) in energy infrastructure. In Mexico, C$5 billion of that is specifically around renewables," Trudeau said.

His message to business leaders will be that the new trade pact is working, he said, and is "creating jobs, opportunity and growth across our countries".

Talks with Biden will likely focus on "maximizing economic opportunities" because there is a great deal of "economic turbulence coming in the coming months," Trudeau said, citing supply chains, the war in Ukraine, inflation and higher interest rates.