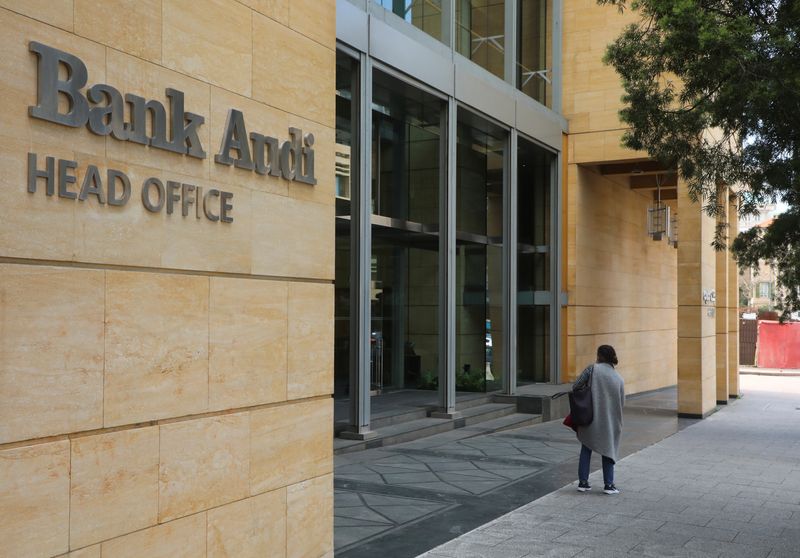 © Reuters. A woman stands near a logo of Bank Audi, as seen at the entrance of the Bank's head office in Beirut, Lebanon, March 4, 2022. REUTERS/Mohamed Azakir/Files

By Timour Azhari and Maya Gebeily

BEIRUT (Reuters) - Lebanon's Bank Audi and Al-Mawarid Bank said on Wednesday they disagreed with a letter sent on behalf of the country's banking association that slammed a staff level agreement with the International Monetary Fund as "unlawful".

The two banks, as well as bankers from two other members of the Association of Banks in Lebanon (ABL) who asked to speak anonymously due to the sensitivity of the matter, said they were not aware the letter was being sent on ABL's behalf.

Their objection to the letter's contents reveals growing fissures in the association, which counts more than 50 banks as members.

The staff-level agreement (SLA) between the IMF and Lebanon pledged $3 billion in financing over four years to help the country recover from a financial meltdown that has seen the currency lose more than 90% of its value and has left most people poor.

In a letter dated June 21 to the IMF, the Decision Boundaries financial advisory firm said its client, the ABL, "holds very serious reservations on the recent SLA", parts of which it said were "likely to further harm Lebanon's economy, probably in an irreparable manner". It said implementing the SLA would be "unlawful"

An ABL spokesperson confirmed the letter had been sent on behalf of the association but did not immediately respond to questions on how the decision to send it was taken.

Audi, Lebanon's top bank, was "not made aware or approved the contents of the letter addressed to the IMF from a consultant of the ABL dated June 21, 2022", it said in a statement to Reuters.

"In fact, they acknowledge that the only way out of Lebanon's acute crisis is an IMF program, which should be enacted imminently to avoid further irreversible value destruction," the bank statement said.

It noted the bank "has important reservations to ensure the plan is actionable, fair and sustainable. The proposed amendments, which still respect the IMF principles, are being channelled to the concerned parties".

Al-Mawarid Bank was "not aware" of the letter and had not been invited to any meetings to discuss it, chairman Marwan Kheireddine told Reuters.

"It's ridiculous that this happens behind closed doors," Kheireddine said, adding that the letter made it sound like banks were "in denial" about having to "be part of the solution and accept to bear certain losses".

"The letter was done without consultation from any other ABL member. It's a bloody scandal," one of the bankers said.

"We are quite upset about it," another said.

Lebanon's government plan had called for banks to be first in line to bear financial sector losses, estimated at $70 billion. The letter had instead called for the Lebanese state to plug the gap by using state assets, turning tens of billions in hard-currency deposits into Lebanese pounds and also using Lebanon's roughly $15 billion in gold reserves.

"I hear voices - including some within ABL - suggesting using our gold to pay depositors... Don't touch the gold, whether to sell it, to pledge it, or to financial engineer it. Don't. Touch. The. Gold," Bankmed CEO Michel Accad said in a tweet on Wednesday.