Explainer-U.S. GDP shrinks in second quarter. Is the nation in recession? 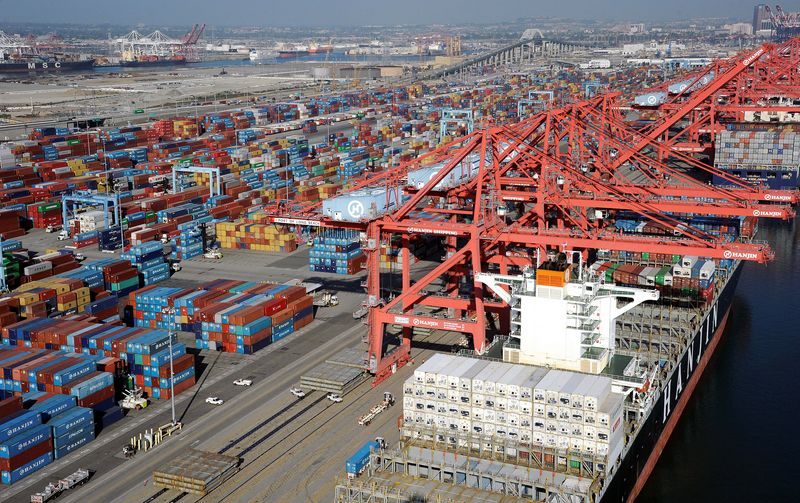 © Reuters. FILE PHOTO: Cranes and containers are seen at the Ports of Los Angeles and Long Beach, California February 6, 2015 in this aerial image. REUTERS/Bob Riha Jr/

WASHINGTON (Reuters) - The U.S. economy shrank for a second straight quarter, data released on Thursday showed, amplifying an ongoing debate over whether the country is, or will soon be, in recession.

The 0.9% annualized rate of decline in U.S. gross domestic product in the second quarter followed a 1.6% drop in the first quarter.

The reading means the world's largest economy now fits an often-cited rule of thumb for a recession.

Although the "two-quarter" definition is handy for analysts, journalists and the general public, it is not how economists think about business cycles.

That's partly because GDP is a broad measure that can be influenced by factors like government spending or international trade. And the first read on it from the Commerce Department's Bureau of Economic Analysis is often revised quite substantially, and should - as Federal Reserve Chair Jerome Powell noted on Wednesday - be taken with a grain of salt.

Instead, economists focus on data on jobs, industrial production, spending and incomes - and job growth in particular has remained strong so far. U.S. employers hired more workers than expected in June and raised wages. But there are growing indications of cooling in the job market, with new claims for jobless benefits, for instance, edging up in recent weeks.

On the downside, personal consumption data for May, released earlier this month, showed spending and disposable income dropped on an inflation-adjusted basis. That sparked a host of gloomy forecasts for June, data for which is due out on Friday, and increasing speculation that a downturn is coming soon, if it is not here already.

The GDP report on Thursday showed consumer spending grew just 1% last quarter, down sharply from 1.8% in the prior period. Residential investment plunged 14%.

And things are likely to get worse, economists say. Inflation is running at more than three times the Fed's 2% target, and the central bank on Wednesday raised its policy rate by three-quarters of a percentage point and signaled more rate hikes are to come.

But whether a recession is already here is unclear, and the weeks ahead are likely to include pitched debate about the real health of the economy.

Usually, but not always.

For example, GDP in 2001, after revisions, fell in the first three months of the year, rebounded in the next three months and declined again in the fall.

Even though there were not two consecutive quarters of declining GDP, the situation was defined as a recession, because employment and industrial production were falling.

The COVID-19 pandemic recession only lasted two months, economists determined afterward, from March to April 2020, even though the steep drop in economic activity over those weeks meant GDP shrank overall in both the first and second quarters of the year.

WHO DECIDES, AND HOW?

In the United States the official call is made by a panel of economists convened by the National Bureau of Economic Research, and sometimes comes a year or more after the fact.

The private non-profit research group defines https://www.nber.org/business-cycle-dating-procedure-frequently-asked-questions#:~:text=A%3A%20The%20NBER's%20traditional%20definition,more%20than%20a%20few%20months recession as a "significant decline in economic activity that is spread across the economy and that lasts more than a few months."

The panel concentrates on things like jobs and industrial output that are measured monthly, not quarterly like GDP. It examines the depth of any changes, how long declines seem to be lasting, and how broadly any trouble is spread.

In the pandemic, for example, the depth of the job loss, in excess of 20 million positions, offset the fact that growth resumed quickly, leading the group to officially call the situation a recession in early June, before the end of the second quarter.

While each of three criteria - depth, diffusion, and even duration — "needs to be met individually to some degree, extreme conditions revealed by one criterion may partially offset weaker indications from another," the group says.

SO ARE WE IN A RECESSION NOW?

Unlikely. While the "two-quarter rule" has caveats and exceptions, there has never been a recession declared without a loss of employment. Jobs are being added in the United States by hundreds of thousands monthly. Wages are up, and labor demand is still strong. "I do not think the U.S. is currently in a recession," Powell said in a news conference on Wednesday.

The pace of job growth will likely slow, but there would need to be a sharp reversal for the current path to turn into one that looks like a recession.

Industrial production, another factor that figured prominently in declaring the 2001 recession, has begun to tell a different story: it fell in June after flatlining in May.

Economists also pointed to the weakness in personal consumption as evidence of a slowdown. While the first-quarter contraction seemed driven by one-off changes in things like imports, the second-quarter report pointed more directly to developing weaknesses in the economy.

Since 1950 the United States has not experienced a GDP contraction over two straight quarters that was not ultimately associated with a recession, which could make the current debate even more contentious.

WHAT IS THE SAHM RULE?

One criticism of the NBER's role as a recession arbiter is that its members take their time in order to avoid reacting to changes in jobs, production or other data that prove temporary. A closer-to-real-time recession indicator, called the Sahm rule after former Fed economist Claudia Sahm, is based on the unemployment rate.

It states that when the three-month rolling average of the unemployment rate rises half a percentage point from its low over the prior 12 months, the economy has entered a recession.

The Sahm rule shows no sign of a U.S. downturn. Instead, the unemployment rate has been below 4% and falling or stable since January.

WHY DOES THE R-WORD MATTER?

Discussion of a recession, and predictions that the economy is headed into one, can have an impact on what happens next. Companies, investors and everyday consumers make decisions on where and how to spend money based on how they think sales, profits and employment conditions will evolve.

And they are already doing so. General Motors (NYSE:GM) Chief Executive Officer Mary Barra said this week that the auto company is taking "proactive steps" to curb spending and hiring ahead of a potential economic slowdown, with further action ahead if the downturn worsens.

Robert Shiller, an economist, predicted in June that there was a "good chance" the United States would experience a recession as a result of a "self-fulfilling prophecy" as consumers and companies prepare for the worst. "The fear can lead to the actuality," he told Bloomberg.

WHAT IS A 'SHALLOW RECESSION?'

Recessions come in many shapes. They can be deep but brief, like the pandemic recession which sent the unemployment rate briefly to 14.7%. They can be deep and scarring, like the 2007-2009 Great Recession or the Depression in the 1930s, taking years for the job market to regain lost ground.

Economists and analysts have recently flagged the possibility that the next U.S. recession may be a mild one. But even the shortest and weakest recessions have trimmed payroll jobs by more than 1%, which would currently amount to more than 1.5 million people.

WHAT IS A GROWTH RECESSION? Another idea discussed by some economists and analysts is a "growth recession," in which economic growth slows below the U.S. long-term growth trend of 1.5% to 2% annually, while unemployment increases but not by a lot. This is the scenario mapped out by some Fed policymakers as the best-case outcome of recent interest rate increases.

When the market rate for short-term borrowing exceeds that for a longer-term loan, it is known as an inverted yield curve, and seen as a harbinger of a recession.

The alarm bells here have begun to ring.

At least some part of the yield curve has inverted before every recent recession. The most widely followed yield-curve measure, the gap between yields on the two-year and the 10-year Treasury notes, inverted early this month and has stayed that way since.

Fed economists prefer other parts of the bond market for recession clues, some of which are giving less comfort than before. The spread between three-month Treasury bills and 10-year Treasury notes, which is cited by San Francisco Fed researchers, for instance, collapsed dramatically in the past two months.

WHAT IS THE BEAR MARKET LINK TO RECESSION?

The recent steep stock sell-off in U.S. equities has also set off alarms. Nine of 12 bear markets, or drops of more than 20%, that have occurred since 1948 have been accompanied by recessions, according to investment research firm CFRA.