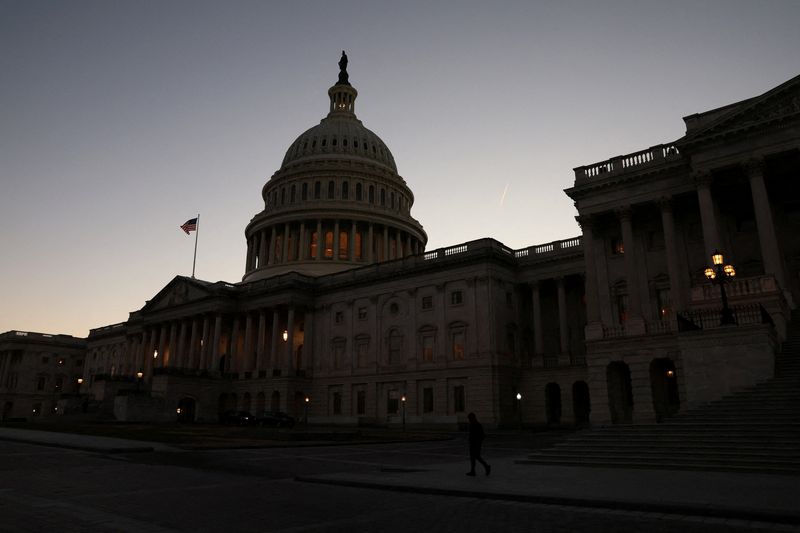 © Reuters. FILE PHOTO: A person walks past the U.S. Capitol building at sunset as the Republican-controlled House of Representatives reconvenes on Capitol Hill in Washington, U.S., January 9, 2023. REUTERS/Leah Millis/File Photo

WASHINGTON (Reuters) - An expected showdown between President Joe Biden's Democrats and a newly minted Republican majority in the U.S. House of Representatives over the debt ceiling is threatening to push Washington to the brink of a debt crisis.

Washington regularly sets a limit on federal borrowing. Currently, the ceiling is set at $31.4 trillion, equal to roughly 120% of the country's annual economic output.

As soon as this week, the government could get so close to the debt ceiling that the Treasury Department might have to suspend investments in some federal pension funds to keep borrowing, according to experts at the Bipartisan Policy Center.

By mid-year, Washington could have to stop borrowing altogether and rely solely on tax receipts to pay its bills. Because Treasury borrows close to 20 cents for every dollar it spends, Washington at that point would start missing payments owed to lenders, citizens or both.

IS THE DEBT CEILING GOOD FOR ANYTHING?

Few counties in the world have debt ceiling laws and Washington's periodic lifting of the borrowing limit merely allows it to pay for spending Congress has already authorized.

Treasury Secretary Janet Yellen and other policy experts have called on Washington to eliminate the limit, because it amounts to a bureaucratic stamp on decisions already made.

Some analysts have proposed that the Treasury can bypass the crisis by minting a multitrillion-dollar platinum coin and putting it in the government's account, an idea widely seen as an outlandish gimmick. Others argue the debt ceiling itself violates the U.S. Constitution. But if the Biden administration invoked that argument, a legal challenge would follow.

The debt ceiling is supported by Democratic and Republican lawmakers alike and both have used it as leverage when their party doesn't control the White House. That makes it unlikely to be eliminated anytime soon.

WHAT HAPPENS WHEN WASHINGTON CAN NO LONGER BORROW MONEY?

Shockwaves would ripple through global financial markets as investors question the value of U.S. bonds, which are seen as among the safest investments and serve as building blocks for the world's financial system.

The U.S. economy would almost certainly fall into recession if the government was forced to miss payments on things like soldiers' salaries or Social Security benefits for the elderly. Economists expect that millions of Americans would lose their jobs. Investors are already worried and are demanding higher yields for some U.S. debt securities that come due around the expected showdown.

HOW DID WE GET HERE?

Republicans won control of the House in November elections, boosting their ability to hold up legislation like debt-ceiling increases.

House Speaker Kevin McCarty has said spending cuts will need to be part of any debt-ceiling increase. Biden's White House has vowed that a Republican "hostage-taking" strategy won't work.

HAVEN'T WE HEARD THIS SONG BEFORE?

This kind of brinkmanship has been part of U.S. politics for decades but worsened significantly after fiscal hawks in the Republican Party grew in power since 2010.

Spending caps stayed in place for most of the rest of the decade, but the episode rattled investors.