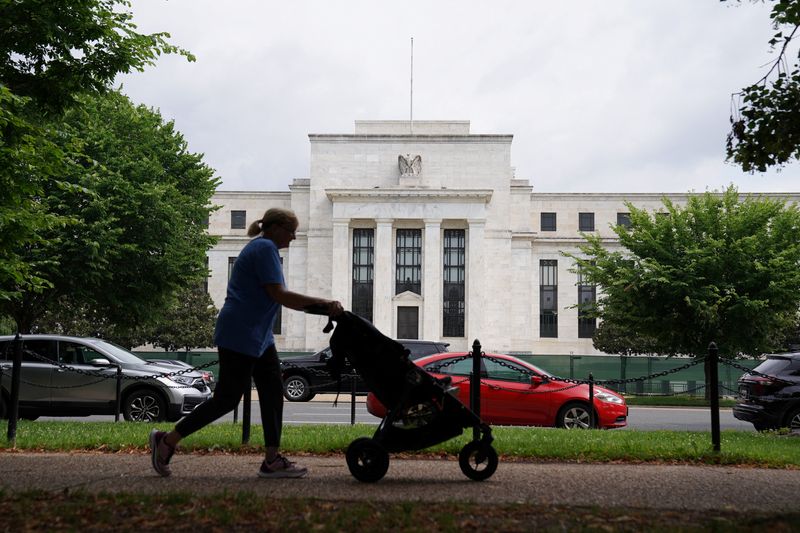 (Reuters) - The U.S. Federal Reserve's big interest rate hike on Wednesday -- and the expectation of more to come -- is aimed at bringing down 40-year high inflation topping 8% on an annual basis in recent months.

But the largest rate increase in a quarter century won't deliver immediate inflation relief. It will take time for higher borrowing costs to ease price pressures.

That could mean more pain for Americans already digging into their wallets to pay more for gas, groceries and pretty much everything else.

"It's going to be an uncomfortable period where inflation is running high and borrowing costs are also going to rise," says Oxford Economics' Kathy Bostjancic.

Here's what the Fed's rate hikes means for consumers:

WILL THIS MAKE IT MORE EXPENSIVE TO BUY A HOME?

One of the sectors the Fed has been watching closely is the interest-rate sensitive housing market, where prices have risen 38% since the start of the pandemic. The surge has been driven by low borrowing costs, put in place by the Fed to cushion the economy from the COVID-19 pandemic, meeting an upswell in demand and a shortage of properties for sale.

Worse is set to come, Pointon says, with mortgage rates probably not peaking until the middle of next year.

WHAT ABOUT MY RETIREMENT FUND?

Stocks plummeted in the days leading up to Wednesday's rate hike as investors worried that sharply tighter monetary policy would drive the U.S economy into recession, if not this year then next.

What happens to stocks in coming weeks and months will depend a lot on whether investors believe the Fed will be successful in reining in inflation without cratering growth. A good read on that may require another several months of inflation and other data, says State Street (NYSE:STT)'s Marvin Loh.

WILL THIS BRING DOWN THE COST OF MY GAS AND GROCERIES?

In short, no. That's one of the difficulties the Fed is facing. By raising rates it can cool demand in the economy by making borrowing costs more expensive, nudging consumers and businesses to curb spending, but it can't do anything about supply shocks.

The spike in global food prices is mostly due to the impact of Russia's invasion of Ukraine, two grain exporting powerhouses that accounted for 24% of global wheat exports by trade value, 57% of sunflower seed oil exports and 14% of corn from 2016 to 2020, according to data from UN Comtrade.

WILL MY AUTO PAYMENT AND CREDIT CARD COSTS GO UP?

If you've got outstanding loans without fixed interest rates, the answer is a simple yes. Though the Fed doesn't control what banks or car dealers charge for such loans, credit card rates and auto loans typically rise when the Fed's policy rate does.

Household debt has been rising rapidly, with consumer credit up more than 8% in the first quarter to $1.5 trillion, a recent Fed survey showed.

COULD THE FED RAISING RATES IMPACT MY JOB?

By raising rates high enough to decisively dent inflation, the Fed will at the very least spark a period of slower economic growth. But investors are skeptical the Fed can achieve its aims without inducing a recession, often defined as two consecutive quarters of negative growth.

Fed policymakers think they may yet be able to avoid a big spike in firms laying off workers. That's because, the thinking goes, the unemployment rate is currently 3.6%, low by historical standards, and there are almost two job vacancies for every worker, so firms could conceivably cut back on job openings without cutting actual jobs.

But many do worry. "If our monetary policy brings about a slowdown of the economy, we're all going to pay the price," Groundwork Collaborative executive director Lindsay (NYSE:LNN) Owens told activists gathered this week across the street from where Fed policymakers were meeting in Washington.

One policymaker, Fed Governor Christopher Waller, recently commented that if the Fed could keep the unemployment rate from rising above 4.25% in pursuit of getting inflation back to the central bank's 2% goal, it would be a "masterful performance."