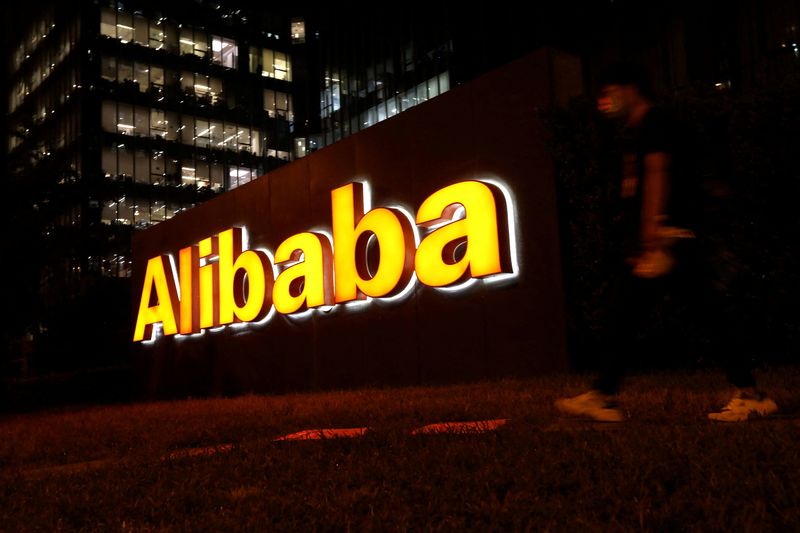 © Reuters. FILE PHOTO: A man walks past a logo of Alibaba Group at its office building in Beijing, China August 9, 2021. REUTERS/Tingshu Wang

In a sign of a tough second half of the year, growth in the world's largest economy, the United States, shrank for the second straight quarter, while in the euro zone business growth slowed sharply in June due to rising cost of living.

cuts with several business units that month and left it to

them to make specific plans, a source told Reuters.

Pony Ma told staff the company should prepare for a

Tesla (NASDAQ:TSLA) Inc June 3 Roughly 10% in "I have a super bad feeling about the economy," CEO Elon

JPMorgan Chase (NYSE:JPM) & June 22 Over 1,000 "Our staffing decision this week was a result of cyclical

Co employees changes in the mortgage market," a spokesperson said.

Shopify (NYSE:SHOP) Inc July 26 10% of its "Ultimately, placing this bet was my call to make and I

workforce got this wrong," CEO Tobi Lutke said, referring to a bet

on post-pandemic growth in online shopping that went sour.

Netflix (NASDAQ:NFLX) May 17 150 jobs "While we continue to invest significantly in the

June 23 300 jobs business, we made these adjustments so that our costs are

growing in line with our slower revenue growth," the

Inc economic boom. A recession could lead to another crypto

winter, and could last for an extended period," CEO Brian

workforce combination of a crypto winter and broad macroeconomic

instability, and we need to prepare the company for the

workforce war in Ukraine unfold, a shift in consumer sentiment, a

August jobs in global billion in cost savings, a report in The Information said.

and parts of Europe.

Apple Inc (NASDAQ:AAPL) July 18 To slow hiring, The decision stems from a move to be more careful during

spending next year uncertain times, though it is not a company-wide policy,

Meta Platforms June 30 Cut plans to hire "If I had to bet, I'd say that this might be one of the

Inc engineers by at worst downturns that we've seen in recent history," CEO

Twitter Inc (NYSE:TWTR) May 12 To pause most CEO Parag Agrawal, in a memo to employees seen by Reuters,

hiring, review attributed the decision in part to a lack of confidence in

Uber (NYSE:UBER) May 9 To scale back "We will treat hiring as a privilege and be deliberate

Technologies Inc hiring, reduce about when and where we add headcount," CEO Dara

spending on Khosrowshahi said in a letter seen by Reuters.

Snap Inc (NYSE:SNAP) May 23 To slow hiring and "We continue to face rising inflation and interest rates,

hiring to 2023 policy changes, the impact of the war in Ukraine, and

more," CEO Evan Spiegel said in a memo to employees.