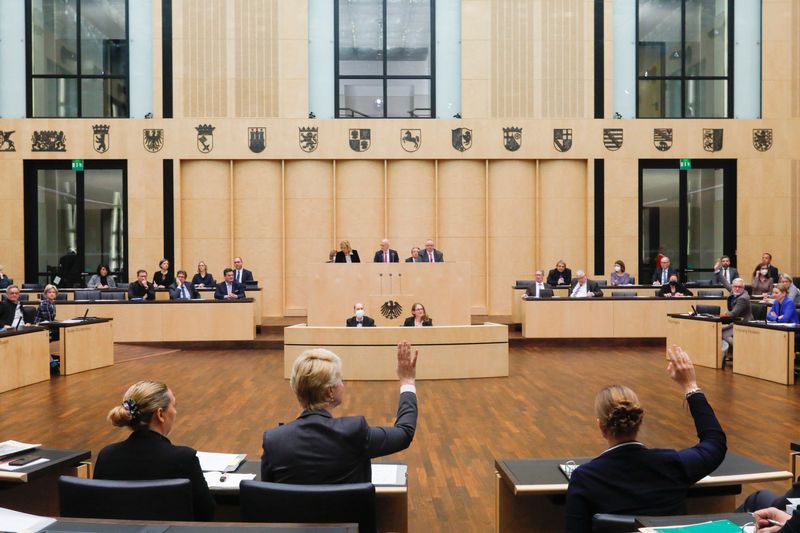 © Reuters. Members of German upper House of Parliament or Bundesrat sit in the plenary hall, during an extraordinary session to vote on Buergergeld or "citizens' money" welfare reform law, in Berlin, Germany November 14, 2022. REUTERS/Michele Tantussi

BERLIN (Reuters) - Germany's upper house of parliament blocked a landmark welfare reform on Monday that was meant to raise payments to people on state benefits and help the unemployed gain new vocational skills, replacing a system that pushes them to accept any job offer.

The government has aimed to introduce the reform from Jan. 1. Labour Minister Hubertus Heil now wants to call on a committee that mediates between the lower house and upper house of parliament to fast-track a resolution so the bulk of the reform can still come into force at the start of 2023.

Below are some key points on the Buergergeld, or "citizens' money", which will replace the Hartz IV system introduced in 2005.

* The reform provides for a significant increase in monthly benefit payments. In future, a single adult will receive 502 euros ($516.21) per month for living expenses, a rise of 53 euros. The standard rates for couples and children will also increase

* The reform is intended to facilitate the placement of the unemployed in the labour market, among other things through more qualification and further training

* A subsidised vocational training course can be taken for up to three years if required instead of in two years as before.

* Additional expenditure due to the reform is estimated at around 4.8 billion euros for 2023, with further increases thereafter