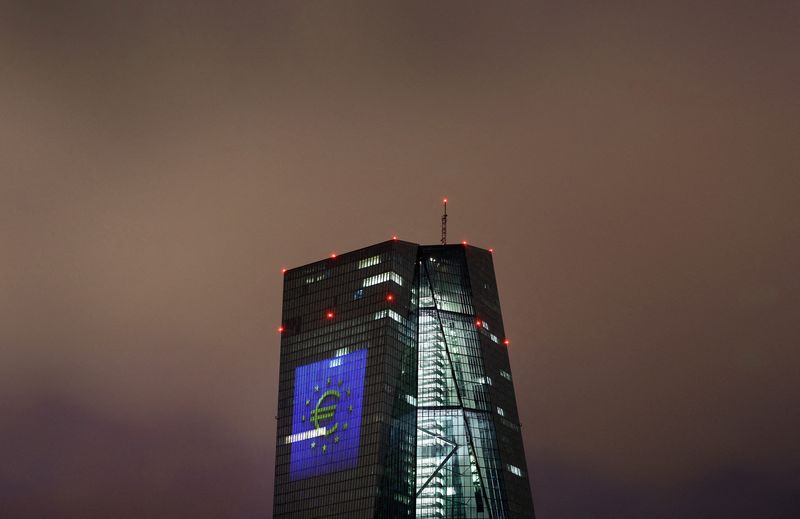 LONDON (Reuters) - European bank shares rose further above a three-year high on Thursday, boosted by the U.S. Federal Reserve's signal that it could raise rates faster than expected, which lifted some of the December gloom hanging over the sector.

European banking stocks benefitted from a sharp rise in borrowing costs on Thursday after minutes of a December Fed meeting released on Wednesday showed officials might be keen to raise interest rates sooner than expected.

The European bank index jumped 1% to touch its highest level since October 2018, outperforming substantially the pan-European index which fell 1.3%.

Profitability for banks typically increases when central banks hike interest rates. But only a move from the European Central Bank (ECB), which is seen as the last major central bank to raise interest rates, would generate a significant earnings increase for the banks across the region, Max Anderl, a portfolio manager at UBS Asset Management, said of the reaction.

Anderl said the early 2022 rally could still have legs, with banks likely to profit from "the move from growth to value rather than a real improvement of underlying fundamentals".

European bank stocks had lost steam in December after climbing a 70% in one year to November 2021, more than twice as much the 30% growth of the STOXX 600 index as banks restored dividends and got a boost from Europe's growth rebound. (Graphic: Banks top sectoral performer in Europe, https://fingfx.thomsonreuters.com/gfx/mkt/lgvdwjngkpo/Banks%20top%20sectoral%20performer%20in%20Europe.png)

And with a resurgence in COVID-19 cases, the expectation for growth for the European financial sector in the last quarter of 2021 is the weakest of all STOXX 600 sectors.

Bank stocks are generally strongly correlated with bond yields and BofA analysts expect 23 billion euros of revenues for European banks for a 100 basis points upward shift in yield curves. That would represent 4% of the estimated industry revenues for 2022 and 15% on profit before tax.

Another factor supporting European bank stocks are their relatively low valuations. Europe's bank sector is trading at 8.8 times forward earnings. That compares to 16.8 times for the STOXX 600 benchmark and 12.9 times for the U.S. banking sector.

Barclays (LON:BARC) analysts said the outlook for banks for 2022 remains overall positive as demand for credit is rising across Europe and stock valuations are still attractive. (Graphic: European banks vs U.S., https://fingfx.thomsonreuters.com/gfx/mkt/zjpqknwmnpx/European%20banks%20vs%20U.S..png)