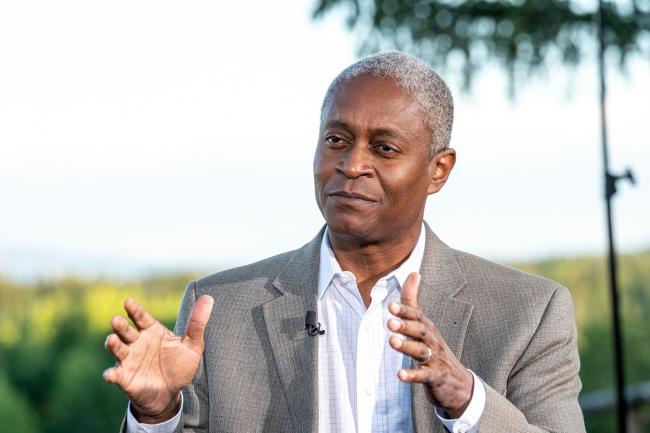 © Bloomberg. Raphael Bostic, president and chief executive officer of the Federal Reserve Bank of Atlanta, speaks during a Bloomberg Television interview at the Jackson Hole economic symposium in Moran, Wyoming, US, on Friday, Aug. 26, 2022. Federal Reserve officials stressed the need to keep raising interest rates even as they reserved judgment on how big they should go at their meeting next month.

“This report was really welcome news,” Bostic said in an interview Thursday evening with CBS News. “It really suggests that inflation is moderating and it gives me some comfort that we might be able to move more slowly now that we are in restrictive territory.”

Fed officials, who meet Jan. 31-Feb. 1, are mulling a further moderation in the pace of rate hikes following a slowing in US inflation. Consumer prices rose 6.5% in the 12 months through December, marking the slowest inflation rate in more than a year, Labor Department data showed.

“If the information I get from business leaders and others is consistent with that, and the first signals we are getting is they are, I’ll be comfortable moving at a slower rate, even 25 basis points, relative to what you saw us do through 2022,” said Bostic, who does not vote on monetary policy this year.

Fed officials lifted rates by a half-point last month to a target range of 4.25% to 4.5%, slowing the pace of rate increases after four straight 75 basis-point moves. Fed officials see interest rates rising above 5% this year and staying there until 2024, according to projections released by policymakers last month.

Investors hardened bets on a 25 basis point hike following the release of the data, according to pricing in futures contracts.