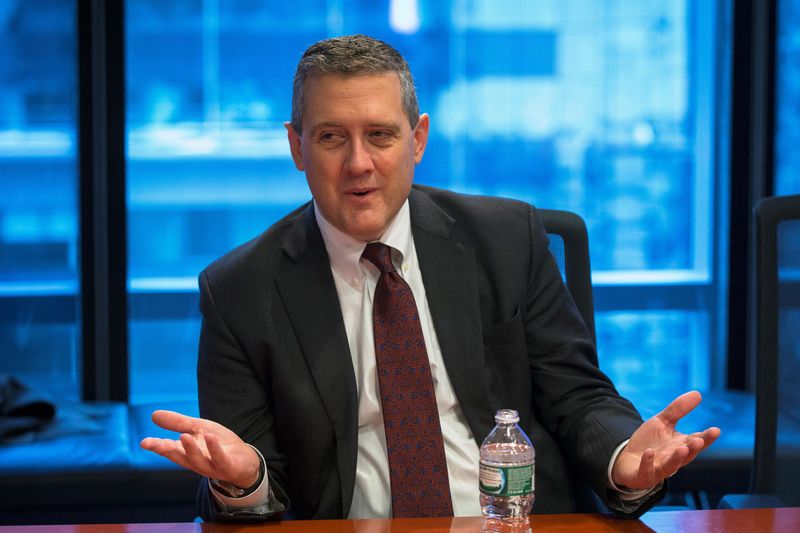 (Reuters) - The U.S. Federal Reserve and the European Central Bank may both be able to execute a "relatively soft landing" that avoids a harsh recession for their respective economies as they raise interest rates to rein in inflation, St. Louis Federal Reserve President James Bulllard said on Tuesday.

That's because both central banks, despite battling the stiffest inflation rates in decades, began their current efforts with considerably more credibility than their counterparts in the 1970s and '80s, Bullard said in remarks prepared for delivery to a gathering of the Money Marketeers of New York University. Their predecessors from roughly half a century ago lacked such credibility before kicking off their own inflation-fighting efforts.

In the Fed's case, that resulted in severe back-to-back recessions in the early 1980s when Fed Chair Paul Volcker had to raise rates to punishing levels to earn credibility and to lower inflation.

"Since modern central banks have more credibility than their counterparts in the 1970s, it appears that both the Fed and the ECB may be able to disinflate in an orderly manner and achieve a relatively soft landing," Bullard said in slides prepared for the presentation.

Bullard's largely academic remarks on Tuesday followed those of a trio of his colleagues, who earlier in the day delivered a uniformly hawkish message that rattled bond and interest rate futures markets that had come out of last week's Fed meeting positioned for the U.S. central bank to dial back the pace of rate hikes.

In separate appearances, Mary Daly, Charles Evans and Loretta Mester, presidents of the San Francisco, Chicago and Cleveland regional Fed banks, respectively, said they were "completely united" on getting U.S. interest rates up to a level that will more significantly curb economic activity and put a dent in the highest inflation rate since the 1980s.

Last month the Fed raised its benchmark target rate by 75 basis points for a second straight meeting, and Chair Jerome Powell said another "unusually large" increase might be appropriate at the Fed's September policy meeting if data between now and then warrants it. The Fed's rate now stands in a range of 2.25-2.50%.

Ahead of July's meeting, Bullard - among the most hawkish Fed policymakers - had said he wanted to see the Fed's target rate in the range of 3.75% to 4.00% by year-end, up from his previous target of 3.50%.

As of June, the median expectation among Fed officials for rates at year-end was 3.40%, a figure which also will be updated at the Sept. 20-21 meeting.

Last month, the ECB lifted its benchmark deposit rate for the first time since 2011 and signaled additional rate hikes ahead.