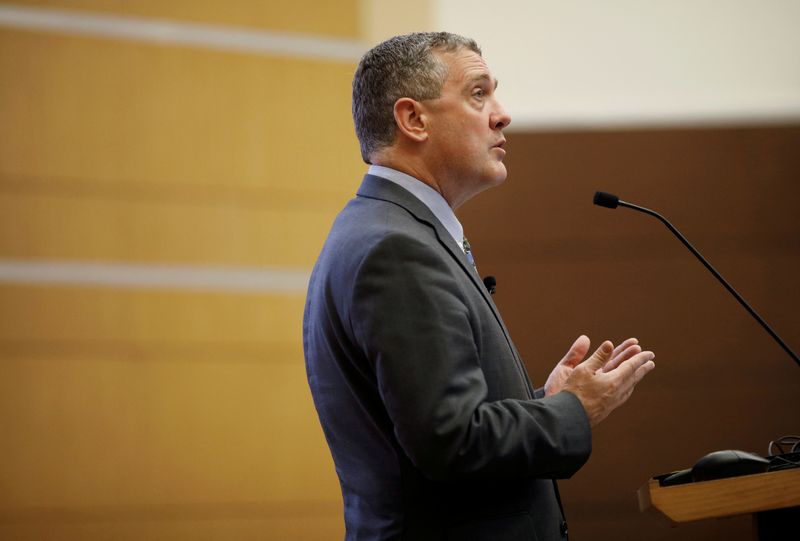 WASHINGTON (Reuters) - The Federal Reserve could raise interest rates as soon as March and is now in a "good position" to take even more aggressive steps against inflation, as needed, after a policy reset last month, St. Louis Fed President James Bullard said on Thursday.

The U.S. central bank in December agreed to end its asset purchases in March and laid the groundwork for the start of rate increases that all policymakers, even the most dovish, now feel will be appropriate in 2022.

The Fed "is in good position to take additional steps as necessary to control inflation, including allowing passive balance sheet runoff, increasing the policy rate, and adjusting the timing and pace of subsequent policy rate increases," Bullard said in prepared remarks to the CFA Society of St. Louis.

An initial rate increase could be approved "as early as the March meeting ... Subsequent rate increases during 2022 could be pulled forward or pushed back depending on inflation developments," Bullard said.

Projections issued in December showed half of the Fed policymakers expect three quarter-percentage-point rate increases will be needed this year.

Inflation is now running at more than twice the Fed's 2% target, and Bullard said that the inflation "shock" experienced by the country means the central bank should be able to satisfy its inflation targeting goals now for several years to come.

The December policy shift came just as the Omicron variant of the coronavirus was beginning to raise daily infection rates.

But Bullard said he did not think the current wave of cases would throw the U.S. economy or the Fed off course.

Infections in the United States "are projected to follow the pattern where the variant was first identified," in South Africa, Bullard said, citing projections that daily case counts may peak late this month.