Fed's George: It will be key to hold rates up once hikes end 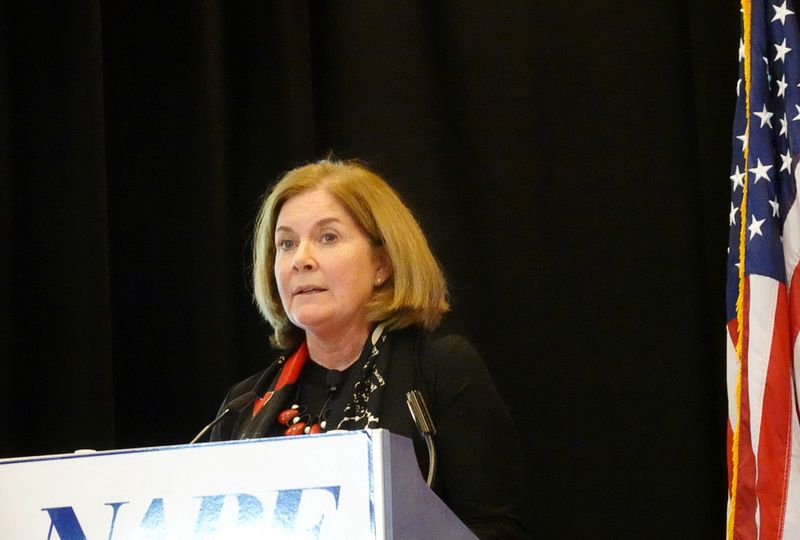 NEW YORK (Reuters) - Kansas City Federal Reserve leader Esther George said on Thursday that she hopes the central bank will continue its efforts to shrink its balance sheet, while also warning that she believes the Fed will need to press forward with rate rises and keep them high for some time once the tightening process ends.

In an interview on CNBC, George said she believes the Fed will need to lift a federal funds rate target now at between 4.25% and 4.5% to over 5% and stay there "for some time...until we get the signal that inflation is really convincingly starting to fall back toward our 2% goal."

George is retiring from the Kansas City Fed this month. She held a voting role on the rate-setting Federal Open Market Committee last year.

The Fed veteran - she started at the bank in 1982 - was often one of the most hawkish policymakers serving at the central bank. She ended up voting against her colleagues' preferred monetary policy stance in nearly half of her FOMC votes, a record without compare among currently serving policymakers.

In the interview, George said her colleagues should press forward with their ongoing efforts to shrink the size of the Fed's balance sheet. Along with its efforts to raise short-term rates to combat high levels of inflation, the Fed is reducing the size of its holdings of securities and cash. From a peak of nearly $9 trillion this summer, the Fed now holds $8.6 trillion, as it sheds nearly $100 billion per month in bonds it now owns.

The Fed has given no guidance about where it will stop its drawdown. A growing number of analysts believe the Fed may have to stop this year due to looming shortages of reserves in the banking system that would threaten its ability to have strong control over its interest rate target.

"I think it's very important that the Committee follow through on its plans to significantly reduce the balance sheet," George said.

She noted that she still views the Fed using its balance sheet as a tool of monetary policy as experimental and full of the possibility of unintended effects on the economy.

"I think we still have a lot to learn about what the consequences are of these balance sheet policies," George said. But she was not ready to say that Fed actions that doubled the size of its balance sheet over the course of the pandemic were wrong, because it was unclear how that period of crisis would play out.

George said that she doesn't believe the size of the Fed's balance sheet has created major financial stability risks but said it's something that needs watching. Some have argued Fed asset buying drives too much risk-taking, creating the rising threat of unexpected trouble.

"I think you always have to be concerned about financial stability," George said. "That doesn't mean I see something on the verge of blowing up, but I think we know from history, those things don't really manifest themselves until they do."