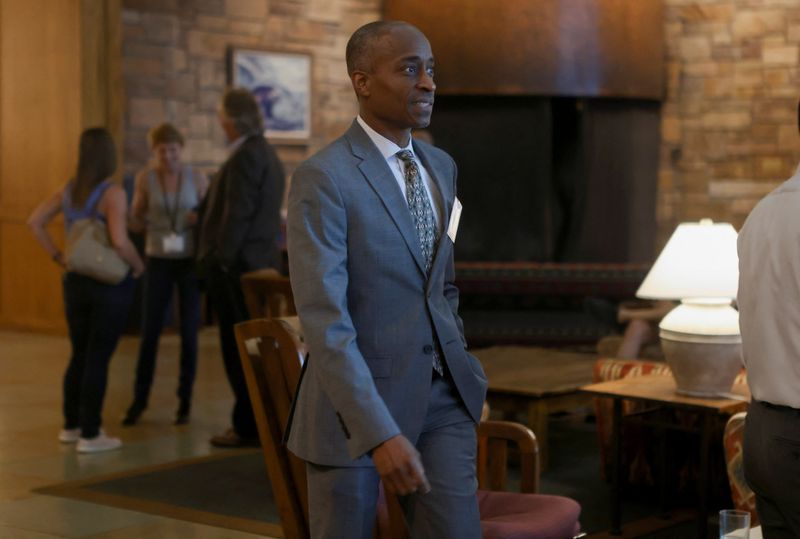 © Reuters. FILE PHOTO: Member of the Federal Reserve Board of Governors Philip Jefferson attends a dinner program at Grand Teton National Park where financial leaders from around the world are gathering for the Jackson Hole Economic Symposium outside Jackson, Wyomin

(Reuters) - High inflation hurts low-income households hardest, and bringing it down is the best way for the Federal Reserve to help bring prosperity to Americans broadly and narrow the economic gaps between demographic groups, a top Fed official said Thursday.

"Low inflation is key to achieving a long and sustained expansion -- an economy that works for all," Fed Governor Philip Jefferson said in remarks prepared for delivery to a research conference on opportunity and inclusive growth at the Minneapolis Fed.

Less-advantaged groups, like Blacks and Hispanics, "tend to see the greatest gains later in an expansion, meaning that they benefit the most from sustained periods of growth," Jefferson said.

He did not comment directly on the U.S. central bank's aggressive interest rate hikes this year or on the immediate economic outlook as those higher borrowing costs begin to slow growth and cool the labor market.

Critics of the Fed's actions say sharply higher interest rates risk sending the unemployment rate surging and the economy into a recession, both outcomes that would weigh particularly heavily on lower-income households.

Jefferson's remarks made a counterargument that Fed Chair Jerome Powell has also used to bolster the case for sticking with inflation-fighting rate hikes -- that lower-income households are disproportionately hurt by fast-rising prices and are especially helped by long expansions.

"Monetary policy cannot address the specific reasons that low-income households suffer the most from high inflation," Jefferson told the conference. But, he added, "pursuing our dual mandate is the best way for the Federal Reserve to promote widely shared prosperity," referring to the Fed's two congressionally mandated goals of price stability and full employment.