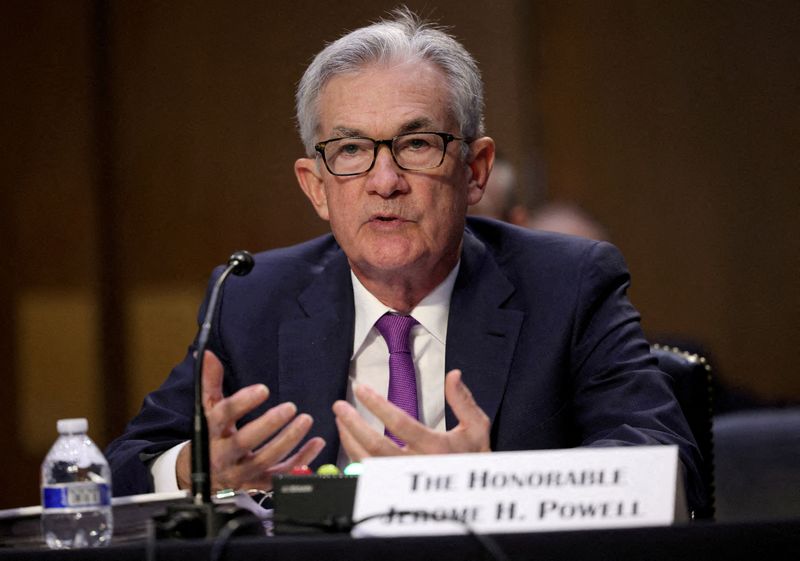 (Reuters) -Federal Reserve Chair Jerome Powell vowed to fight inflation in testimony on Tuesday before U.S. lawmakers who are expected to focus on the recent surge in prices as they consider him for a second term as head of the central bank.

In opening testimony to the Senate Banking Committee, Powell said the economy's fast-paced recovery from the coronavirus pandemic was "giving rise to persistent supply and demand imbalances and bottlenecks, and thus to elevated inflation."

"We know that high inflation exacts a toll," he added, pledging to use the central bank's full suite of policy tools "to prevent higher inflation from becoming entrenched."

The positions require majority approval by the full Senate, which is narrowly controlled by President Joe Biden's Democrats.

At the start of Tuesday's session, Democratic Senator Sherrod Brown, the panel's chair, and Senator Pat Toomey, its senior Republican, endorsed Powell's management of the Fed's response to the pandemic, even as they raised questions about its next steps.

"I believe you've shown the leadership" to lead the Fed through debates over inflation, regulation, and an ethics scandal over stock trading by senior officials, Brown said.

Toomey said he was concerned that the Fed's robust response to the pandemic may now be stoking inflation and "could become the new normal," and repeated his criticism of the central bank delving into what he regards as political issues like climate change and inequality.

Even as the pandemic continues, inflation has emerged as the Fed's chief concern.

In December, the central bank decided to end its purchases of Treasuries and mortgage-backed securities - a legacy of its nearly two-year battle with the economic fallout of the pandemic - by March, and signaled it could raise interest rates three times this year.

Since then, COVID-19 infections have surged to daily records, with hospitalizations rising and quarantining employees sapping an already stretched labor supply, and some observers expect the mismatch between supply and demand that is putting upward pressure on prices to intensify further.

Tuesday's hearing will be Powell's first chance to say how he sees those disruptions influencing his outlook for both the economy and monetary policy.

Investors and traders will be listening for new clues on when the Fed may begin raising interest rates https://www.reuters.com/markets/us/feds-bullard-says-first-interest-rate-hike-could-be-march-2022-01-06 and possibly reduce its more than $8 trillion in bond holdings to bring down inflation, now running at more than twice the Fed's 2% target.

Financial markets are pricing in an aggressive response, with interest rate futures traders betting on four rate hikes this year.

Powell may face tough questions both from some Democrats, including Senator Elizabeth Warren who has said she opposes his renomination because she sees him as too easy on Wall Street, and from some Republicans who have publicly worried the Fed is responding too late to rising prices.