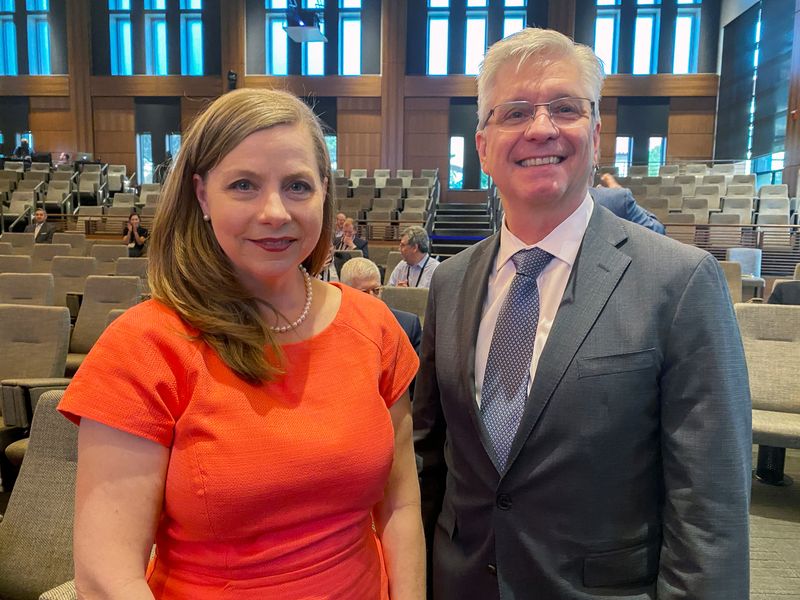 © Reuters. FILE PHOTO: Federal Reserve governors Michelle Bowman and Christopher Waller pose for a photo, during a break at a conference on monetary policy at Stanford University's Hoover Institution, in Palo Alto, California, U.S. May 6, 2022. Picture taken May 6,

In remarks prepared for delivery at an Arizona economic conference, Waller said it remains unclear how high the Fed will need to raise interest rates, and that he will not make a final decision about what to do at the Fed's Dec. 13-14 policy meeting until reviewing the rest of the data between now and then.

"I will not be head-faked by one report," Waller said of consumer price data released last week that saw larger than expected declines in both headline inflation and a narrower but more closely watched index of "core" prices. "We've seen this movie before."

But he also said the most recent reports were a "positive development" that he hoped would be "the beginning of a meaningful and persistent decline in inflation" back to the Fed's 2% target.After raising rates in atypically large three-quarter point increments at its last four meetings, Waller said that as it stands "the data of the past few weeks have made me more comfortable considering stepping down to a 50-basis-point hike," in December and possibly to smaller quarter-point increases after that.

The Fed's latest policy statement flagged a likely step down in the size of upcoming rate hikes, with officials shifting focus to a more nuanced approach that gives them more time to monitor how the economy and inflation are behaving while leaving themselves free to keep pushing rates higher.

Recent positive news on inflation has led investors to bet the Fed may not have to do as much as expected, and may only need to raise the target policy rate to around 5%. It is currently set in a range of between 3.75% and 4%.

Waller said signs the economy and wage growth are slowing have added to his sense that Fed policy is beginning to do its job.

But he cautioned it was too early to pin down just how high rates may need to go.

"One report does not make a trend. It is way too early to conclude that inflation is headed sustainably down," he said. "Getting inflation to fall meaningfully and persistently toward our 2% target will require increases in the federal funds rate into next year. We still have a ways to go."